As I said in my last blog post, because I was traveling in the off season (early March) I opted to head north to Slovenia rather than remaining in Croatia for the rest of my vacation. It ended up being a pretty good choice overall.

I woke up very early to catch a bus to Ljubljana. Unfortunately the only two bus choices I could find were either very early in the morning, or very late at night, so I opted to go for the early morning option. Thankfully the manager of the hotel I was staying at was very gracious and served me breakfast before I left. And then after that I took off for the bus station, just a short walk from my hotel.

The last few buses I took during my trip were all through the company Flixbus. Unfortunately my experience them was largely negative, which I’ll elaborate in future posts, but my first ride was actually fine. We crossed over the Slovenian border, which I had completely forgotten would involve a passport check. Even though Croatia and Slovenia are both part of the EU, Slovenia is part of the Schengen Zone and Croatia is not, which means it’s more of an official border crossing than most of the ones in the EU. I felt a little nervous because apparently everyone else on the bus was either Croatian or Slovenian, meaning I was held back for my passport to be stamped while everyone else was able to walk across the border (yes with buses they have you get out, line up and show your passport, and when okay-ed walk over the border where the bus meets you on the other side).

Thankfully, only a moment later my passport was returned and I was able to join my fellow passengers.

I arrived in Ljubljana probably around 10 AM. My hotel had said I couldn’t check in that early, understandably, but was welcome to come leave my luggage. I knew I could try to figure out the bus system in town to get there, but the weather was actually really nice, and since I didn’t have any Euros yet (Croatia uses their own currency called Kuna), I opted to walk.

It was about a thirty minute walk, maybe a mile and a half (2.3 km). I enjoyed getting to see some of the city as I strolled, pulling my suitcase along behind me.

I arrived at my accommodations, a bed and breakfast called Isabella Rooms. I met the owner Manja who was very sweet and actually did allow me to check in early. I dropped my things in my room, a small single bed with a shared bathroom, not my fanciest accommodations but a good bargain and close to the city center.

The first thing I did was just head down to the old town. The weather was just incredible. Sunny, but not hot. There was a flea market going on along the river because it was Sunday, and I had fun browsing. After that, I grabbed some lunch at a grocery store (some cheese, crackers, fruit, and a drink) and settled on a bench along the river to enjoy the sun and people watch. It was lovely.

I did quite a bit of wandering, just enjoying the sights. I found a fun free exhibit on the Roman archaeological finds from the area. I explored most of the old town, and then headed over to Tivoli Park, a large open space which was filled with people enjoying the lovely weather. There was an open-air exhibit on architecture in Ljubljana as well. 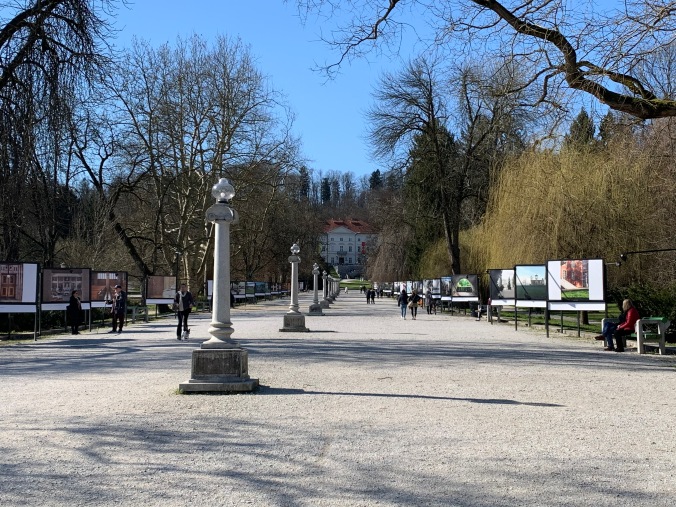 I also peeked into the Serbian Orthodox church near the park, which had beautiful interior decorations. It was very different from a lot of the Catholic cathedrals I’d seen.

Once done in that area, I was reluctant to leave the sunshine, but as almost all museums in Ljubljana are closed on Mondays, I knew if I wanted to see any I had to do it while they were still open on Sunday. So I headed off to the Slovenian Ethnographic Museum. A bit of an odd choice perhaps, but I’d seen good reviews and it sounded very different.

The museum was a mixed bag. Some of the exhibits were really interesting, but there were some parts that really didn’t have any English available. Still, I enjoyed getting to learn more about Slovenia’s culture, which is definitely unique. They also had temporary exhibits on gingerbread making, candle making, shoes, and Croatian toys. It provided a fun afternoon.

I walked back to my bed and breakfast and had a break to rest my feet for a bit. I did some research on restaurants as well, figuring since it was a Sunday night I might want to make sure I had some options in case places were crowded.

Sure enough, when I arrived at my choice Julija (Julia), a cute little place in the old town just off the river, it was already getting crowded. One of my favorite parts of traveling alone is that it means I’m usually able to get a table even without reservations when things are busy. Thankfully, this ended up being the case.

The place was really cute and the food was delicious. I had a plate of zucchini and eggplant cooked in marinara sauce and covered in mozzarella to start. Then I had some steak with black truffles, mashed potatoes, and asparagus. And of course a glass of Slovenian red wine. Unfortunately I was too full to enjoy dessert, and the place was still very busy, so I opted to give my table to someone else rather than trying anything else. 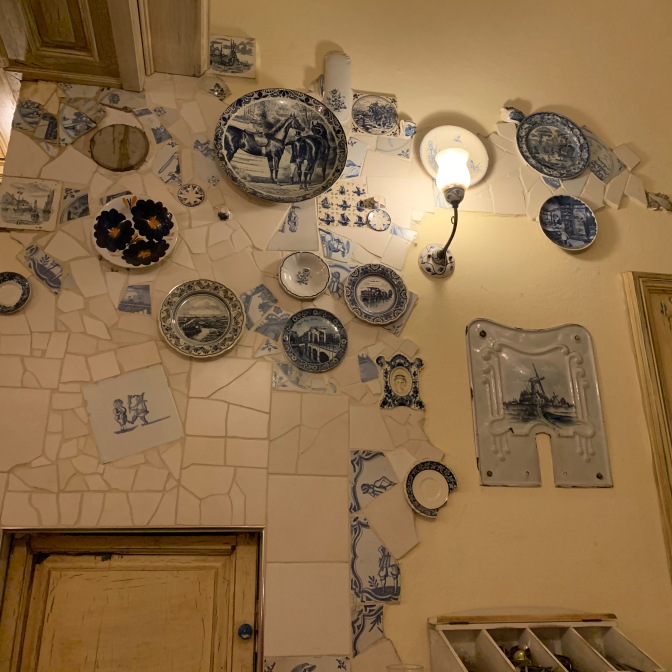 It was an absolutely amazing day. As I walked back to my room for the night, I couldn’t help but smile. What a perfect introduction to Slovenia. Most think Ljubljana means “to love/like” and I definitely fell in love with the city. I went to bed so excited to get to wake up and have more adventures there the next day.

3 thoughts on “Falling in Love with Ljubljana: Adventure Day 7”

Love beautiful evening walks on the river and spotting the heron busy fishing 🎣 #idahome #boise
Experimenting with different salads in this summer heat 🥗☀️
Mom and baby deer siting on my walk today! So cute! 🦌 #nature #animals #idahome
Going vegetarian this week to make up for all the meat I ate last week. So here is my meal tonight. Heavenly Grain Bowl based on a recipe from my Blue Zones cookbook I’ve been enjoying. Veggies, beans, and chili peanut sauce on a bed of quinoa. Delicious and healthy! #healthylifestyle #food #yum #vegan
Got to love the beauty of summer. Perfect day for a walk in the park to enjoy. Those water lilies especially had me oohing and aahing. 🌷#flowers #nature #parks #idahome
A little different from the Hawaiian beaches I got used to last week! 😄 #beaches #travel #oregoncoast