So the next day we started off by getting up early to go find some coffee and pastries. We then decided to go see some more of Seville before taking off. We started off by seeing a part of the university that used to be an old tobacco factory. It was very beautiful.

Then there was the Plaza de España. You might recognize it from Star Wars. It’s a beautiful square regardless of any film attachments you may or may not have, so be sure to visit if you’re in town. 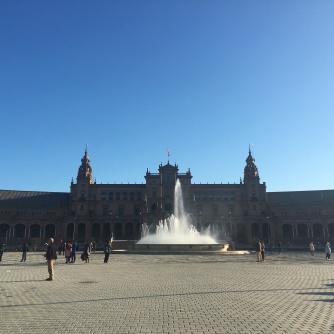 Afterwards it was off to the Cathedral. We had to figure out the confusing entry system, which took a while. Apparently if you have reserved tickets or are with a group you go in one entrance, and the rest go in another. The signs are very unclear, so just be warned it might take a little bit to figure out.

We went inside the cathedral, enjoying its huge size and beautiful decorations. My brother had already been there, so he told us some things he’d learned on his tour years before. My favorite was the story of the picture of Saint Anthony that was stolen years earlier and then eventually found. Apparently Saint Anthony is the patron saint of lost things. We also saw Christopher Columbus’s grave and we climbed up the huge bell tower to enjoy a view of the city. Over all, it was a very fun visit. I highly encourage seeing it if you’re in Seville. 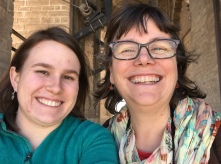 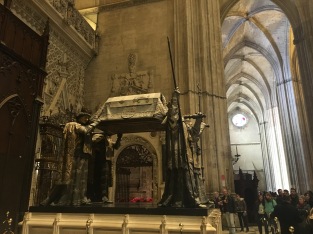 After that we grabbed our things from the hotel and headed on our way.

We stopped in Santa Olalla del Cala which had a beautiful castle on the hill. As we’ve often found traveling in Europe, the roads to it were not well marked. So we ended up driving down a steep rocky road before realizing it was a dead end and having to drive back up. Finally we found the right road and parked to go see the castle.

It was closed. As far as I can tell it’s not open to the public, but who knows. Maybe it is during the summer. Regardless it was fun to see. I will never tire of seeing castles. They are truly amazing.

After that we continued on our way until we reached Merida.

My father had booked a Casa Rural. We’d done this before, and really enjoyed it. Basically it’s sort of B and B like, where you stay in someone’s home in the country. It’s nice to get away from the big commercial hotels for a while and enjoy some real hospitality from the people of the country you’re in. Sure enough, our hosts welcomed us in and showed us up to our lovely rooms.

After we had dropped our stuff off we set off by car to the center of Merida where there were a variety of Roman ruins.

Merida is especially famous for the Roman theater which is surprisingly intact. I’ve seen lots of Roman ruins over the years traveling through Europe, but I have to admit the theater was quite impressive considering how old it is. We wandered through that and the amphitheater there before setting out to see other things. The ticket we bought allows you to see several of the Roman things in town, which is a good deal. So if you’re sticking around Merida be sure to check it out.

We headed down to see the temple next, which is open to the public. And then we walked down to the river and enjoyed the Roman bridge there.

It was cold, however, so we went to Burger King to grab some drinks before our restaurant was open. I have to say, I’ve never seen a dirtier Burger King in my life. Apparently people in the town didn’t understand that you needed to bus your own dishes. So the tables were littered with trash. Just a cultural difference I suppose. Although hey, I’ve seen people being inconsiderate all over the world, so it’s one thing that I’d say is sadly universal.

After that we walked around the main square a little and the little Christmas market and then headed to our restaurant. It was called La Taberna de Sole and featured a lot of meat dishes. I had lamb chops essentially. They weren’t necessarily my favorite, but I made do. Something about eating meat off the bone often makes me feel kind of uncomfortable. Times I think I could become a vegetarian. However, dessert more than made up for it for me. I had hazelnut ice cream. It was absolutely delicious. My father had a sort of dessert soup as well and that was equally amazing. So yes, overall quite good and would definitely recommend.

We headed back to our hotel for the night after that. Over all, a very good day exploring!

After our Morocco adventures our family made our way to Seville. Along the way, my father decided it would be fun to stop in the town of Jerez and tour a sherry bodega, something the region was famed for, and therefore a good stopping spot along the road.

However, we arrived to find that the bodega we’d wanted to visit was apparently closed for Christmas hours… even though there were no signs and the website didn’t say anything. This seems to be so much of life traveling. Go someplace and find out it’s closed.

We considered visiting the Spanish riding school, but weren’t sure how much we’d actually be able to see since it wasn’t a day they were putting on a show. So my father instead proposed visiting a fancy manor house.

On our drive towards it, however, we noticed that the Tio Pepe bodega appeared to be open. There were people going in through the gate. So while it wasn’t the one my father had proposed visiting, it still would be a means of seeing the sherry making process and tasting some of the famed product. 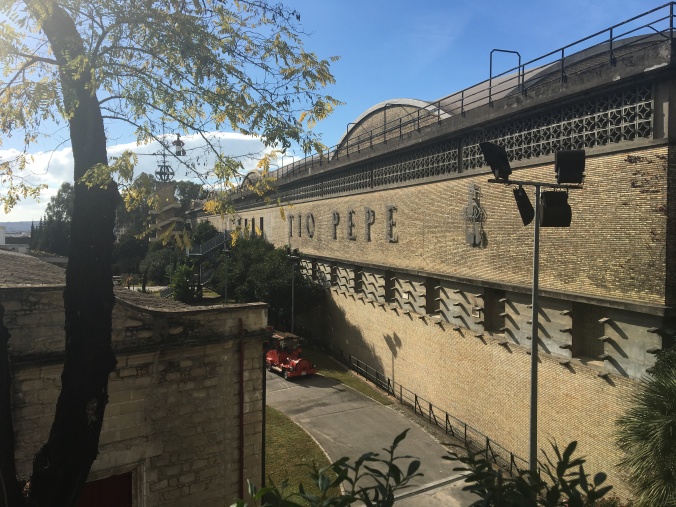 We decided it would be worth a try.

There was an English tour not too long after we’d arrived. They started us on a cute little train, taking us around different parts of the complex to show off what they’d built. Then we took a walk through the actual bodegas before they stopped to show us a really cheesy documentary. In my opinion they could have cut that in half at least, if not left it out entirely. Seeing the actual bodega was far more interesting.

Our last stop was for tasting. We’d opted to just have two glasses and skip any food or such which cost extra. I ended up being glad we only did two as they filled the glasses quite full. The sherry wasn’t really to my taste. However, I tend to like pretty sweet things and the strength of the alcohol really wasn’t up my alley. For some, I’m sure it would have been wonderful.

Needless to say two glasses of sherry on an empty stomach had me kind of tipsy. I’m not a big alcohol drinking, so I admit my limits are pretty low. I basically downed the water my mom offered me and started eating cookies I had left over in my purse. I then had to go walk through the gift-shop in that state. And the gift shop at Tio Pepe is a lot of glass bottles… thankfully no disasters ensued.

Thankfully we left not too long after, and I was able to eat some lunch. We had a picnic in the park in town, munching on bread and cheese and olives in the gorgeous afternoon sun.

After a short break we were back in the car and on the road to Seville.

We arrived in the late afternoon, finding a place in the parking garage and then walking into the center of town where our hotel was. We checked into our hotel and then went to walk around some and find something to eat.

The city was beautiful. All lit up for the holidays with purple lights everywhere. The streets were filled with people and there were flamenco dancers and other fun street entertainment. 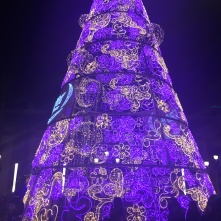 We walked across the river and enjoyed the views of the city. However, with some low-blood sugars in the family and people just becoming more hangry by the second, it became apparent it was time to find food, which was why we settled for heading to La Azotea for food.

It ended up being one of our favorite restaurants of the entire trip. We arrived right when it opened, had a seat and within minutes the whole place was full. And it became apparent why.

We picked several different dishes, and they all ended up being amazing. We started with a salad…I honestly forget what was on it.  We devoured it before I could get a picture, so sadly no photo evidence exists. The next was our favorite though. Rice paper wantons with shrimp and cheese. They were incredible. Then came the artichoke hearts, which were yummy, but not quite to the same level. And then a plate with cod in a sauce that was also quite delicious.

However, it was decided that the wontons were amazing. So we ordered another plate of those. Everything on the menu looked good, but it was hard to resist this particularly delicious dish.

After that we walked a little more. My brother wanted churros but the place we’d seen earlier was closing. The joy of Spanish meal times means that you can’t do anything after you’ve had dinner usually.

After that it was back to the hotel for sleeping. We were excited for the next full day ahead!