So sometimes on trips, you end up staying in places not because they are something you really want to see, but because they make for a convenient stopping point on the way to other important places.

Rijeka was one such stop on my journey. After doing some research about Croatia and learning that many of the coastal and island towns shut down during the off season, I realized I would either need to do more things inland or find another place to spend my time. While there are some inland sites in Croatia worth seeing (for example the Plitvice Lakes, Zagreb the capitol, and others), I read really good things about Slovenia which is right next to Croatia.

In order to get there from the lakes, it would be a long bus ride, so I figured I’d stop in the coastal town of Rijeka. I had not heard anything very good about it, in fact Rick Steves pretty much just said it was a grubby port town, but there weren’t very many other options.

Well, I woke up early to make my journey by bus. Of course, to my delight it was pouring rain once again. I hauled my suitcase down the trail to the National Park where the bus stop was. I stood under the shelter shivering, suddenly wondering if this was the right place. No one else was there, and there was no sign of the bus, even though my ticket indicated the parks were the start of the route.

I was just about to give up and figure I’d misunderstood where to catch my bus and had missed it, when suddenly around the bend appeared a bus! I quickly went up and got loaded on. I curled up in the warm seat, shedding my wet layers and laying my umbrella near the heater to dry. I was the only one on the bus which was very strange!

We stopped shortly after at the other park entrance and picked up another passenger. I was relieved to know that apparently the bus did stop at both bus stops, which would have been nice to know before panicking.

The ride wasn’t too long, but it remained rainy and gray, so not the best for enjoying the scenery. But before too long, I arrived in Karlovac where I was going to catch a transfer bus to Rijeka.

I had a short layover (do you use the term layover for buses?) before I was able to board my next bus and continue on my way.

The sun had appeared again by the time I made it to Rijeka. I disembarked towards my hotel, not expecting much.

I arrived at my hotel, right off the port called Prima 4 Rooms. It was one of my pricier stays just because of the location, but it was well worth it to be so close to everything.

I dropped my things and then took off to go explore.

The first thing I enjoyed was just wandering around the old town, especially the small market very close to my hotel. It was fascinating to me because Rijeka had a lot of charm to it. The architecture in particular was very beautiful. But, for whatever reason it was kind of grubby. Just a good washing could really help them with their image. But nonetheless, I still enjoyed looking around. 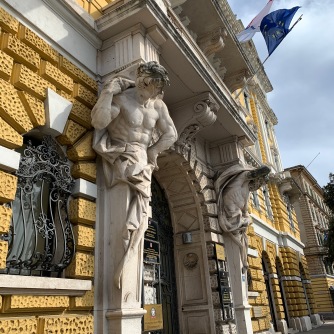 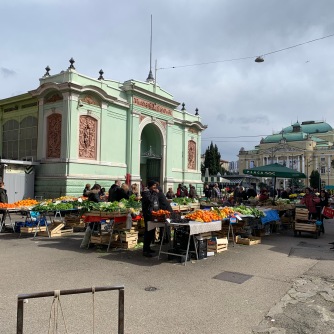 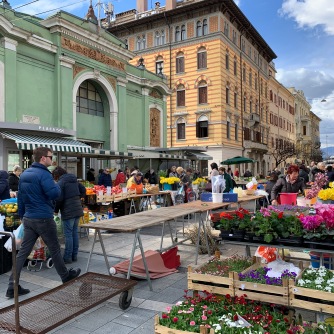 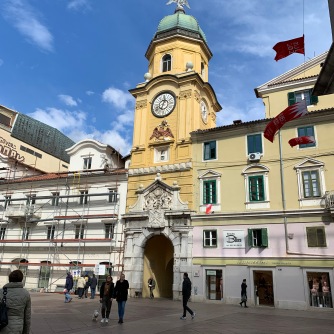 After that, I decided to head up to the castle. I always love exploring local castles, and this one was free to enter! I figured that was a win win.

It was a long climb up to the fort. I took a few breaks along the way and just enjoyed the views. But at long last I arrived at the top and was able to enter the castle.

There wasn’t a lot to explore, but I walked around a bit and then settled at the cafe in the center and enjoyed a cup of coffee. 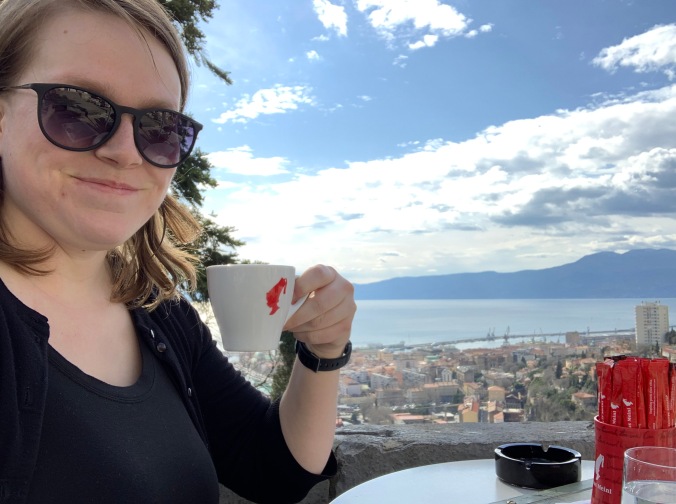 From there I wandered over to the nearby church and monastery and peaked in. I always enjoy seeing cathedrals. I know some visitors to Europe tire of them after a while, but to me each one has something unique to offer. 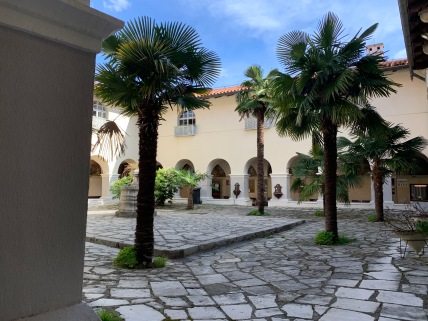 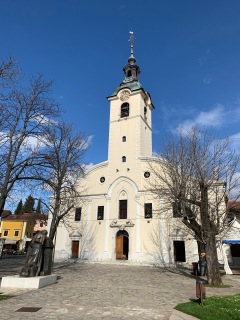 From there I headed down the hill and back into the center of town. I decided to do some more wandering and see what else there was to see. I actually found that Rijeka had some good signs in the historic area offered in a variety of languages. I looked at another cathedral and then also found a cool old tunnel from WWII that was open to walk through. 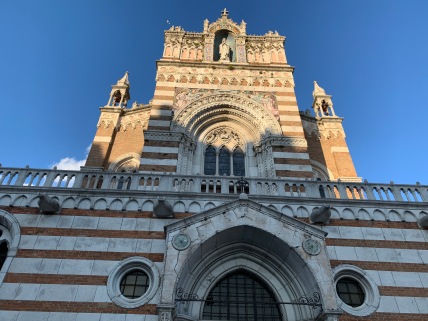 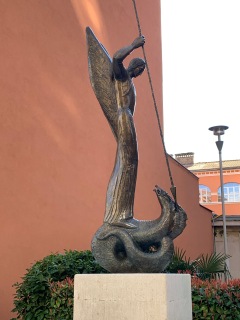 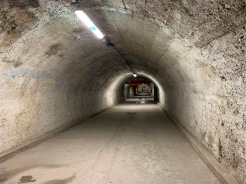 After all of that I took a little break back at my hotel and did some research on where I wanted to grab dinner. But there was one more thing I wanted to see. The Maritime Museum in town was supposed to be interesting, but also housed in a beautiful palace. It was open until 8 PM, so I figured I’d stop by before dinner.

I arrived at the museum and asked for a ticket. However, the man at the desk informed me sadly the museum was closed for a wedding. He told me I was welcome to look at the maritime and temporary exhibits, but wouldn’t be able to tour the palace itself. Graciously he offered to let me in for free as a result.

I was a bit disappointed, but figured I’d go ahead and look around at what was available anyways. I’ve seen some much better maritime museums before, but this one was still nice.

Thankfully, by the time I was done wandering around the exhibits, the man ran up to grab me and let me know the wedding was over and I was welcome to see the rest of the building!

It was indeed beautiful and I enjoyed getting to see it. Highly recommend the museum to anyone spending a day in Rijeka! 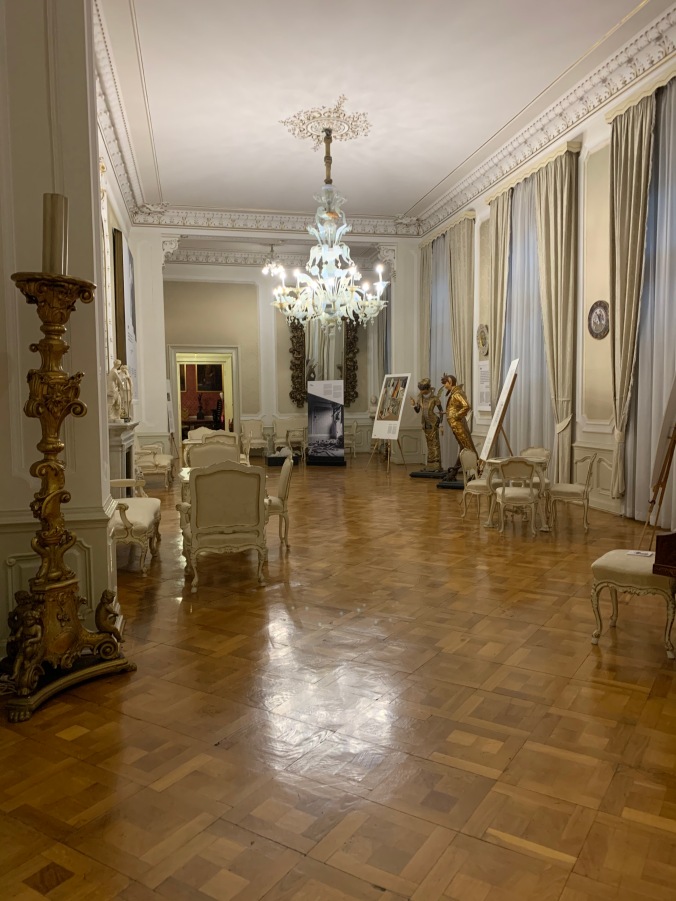 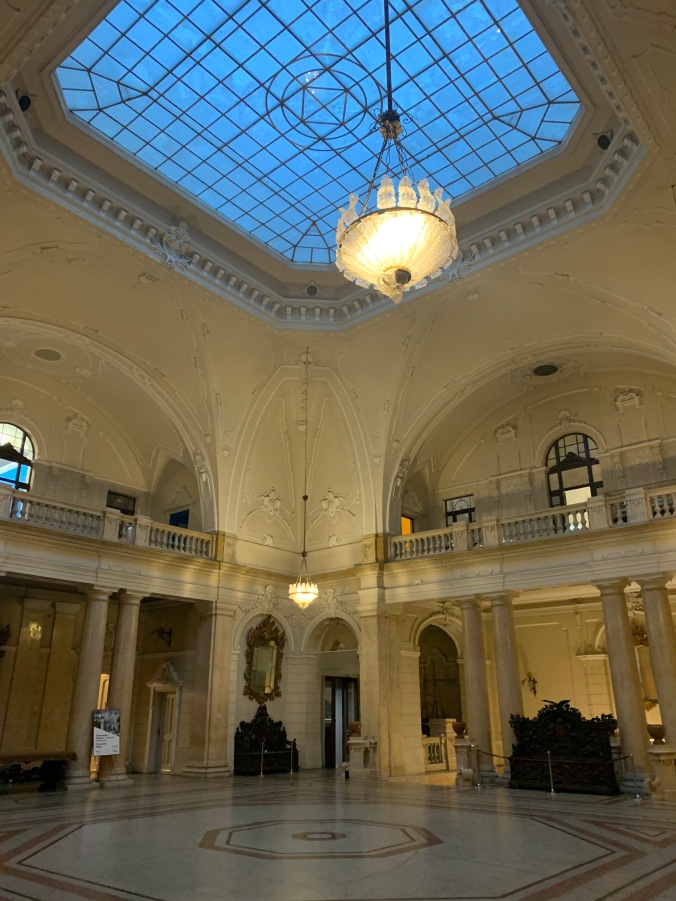 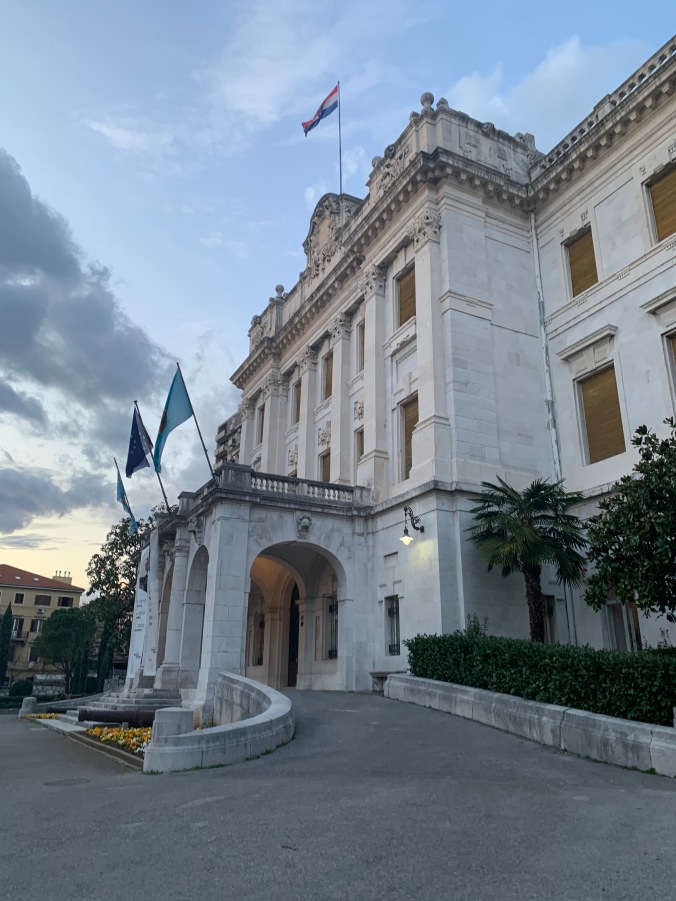 After I finished wandering, I headed back off to go find some food.

I stopped at Maslina na Zelenom trgu (Olive on Green Square) which looked good and had some decent reviews. I started off with some homemade hummus which sounded good, though was maybe a little too much for one person to eat on her own.

My main course I settled on having pizza. For those who don’t know, as Croatia is pretty close to Italy they do tend to have a good amount of Italian food as well as their own more traditional dishes. Besides, the pizza was supposed to have a local sausage, sheep cheese, and caramelized onions which definitely sounded unique compared to what I’d find in the US. It did end up being delicious! 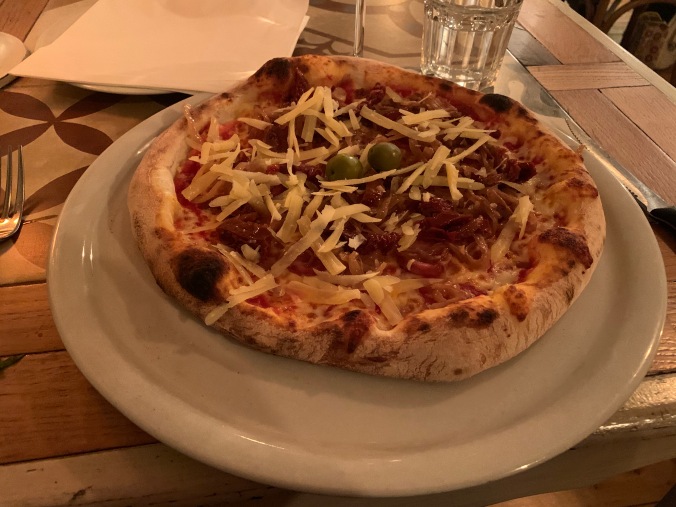 I paid my bill and walked around a little more. I bought some Croatian brand ice cream at a grocery store and ate it on the way back to my hotel. Then it was off to bed, knowing I’d have an early morning ahead of me as I set off to Slovenia!