So as a young person, my father had a Spanish exchange student come live with his family. Somehow even after all this time, my father has kept in touch with her. When we came to Europe the first time when I was nine, we went to visit her and her family. I remember a whole trip filled with people I didn’t know chattering away in Spanish and eating new foods and having a fun time exploring around Bilbao where she lived.

Now, I hadn’t seen these people in fifteen years. However, my family decided it might be nice to stop by and say hello while we were in the area. So that was how I ended up at a table with about twenty people all speaking Spanish and enjoying a fantastic meal together.

I will say, I’ve forgotten what it feels like to not speak a language. Sure, I’m terrible at French and still struggle. However, I can sit at a table and at least know what’s going on, and order my food. So it was a bit difficult to readjust to not understanding much of anything at all.

Still, it’s always nice to be around friendly people even if you don’t speak their language.

Our friend of the family started by taking us for a beautiful walk in the countryside. It was a lovely day, so nice we didn’t need coats (this was December 23rd just to keep that in mind). And we walked with her, her parents, and her adorable dog! My brother and I had a great time watching the silly dog and giving her attention. That was until she rolled in cow poop. Well, that’s the one problem with dogs I suppose. 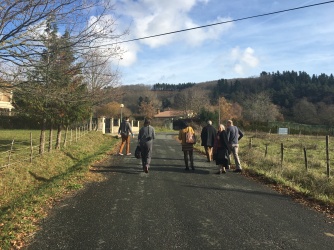 After a very pleasant walk, going over a Roman bridge, and seeing sheep being herded, we headed by car to a nearby town to have lunch.

We started with an aperitif in another restaurant while people continued to arrive. We eventually finished drinks and moved to another restaurant that didn’t even have enough room for us at first, because there were so many of us!

At long last we settled at a table and began a feast!

We started with some kind of a traditional bean and sausage stew. Since I didn’t speak the language, I never did see the names of the dishes, but it was very good.

Next I had a chicken dish. And I finished off with a delicious pastry dessert. It was all amazing, but it was also fun to spend time with people we hadn’t seen since childhood. Still, some things never change. I remembered my brother pulling out his Gameboy back in the day to interact with the other boys. Sure enough he and one of the boys pulled out their phones to play games together. Well, guess technology at least can pass the language barrier. 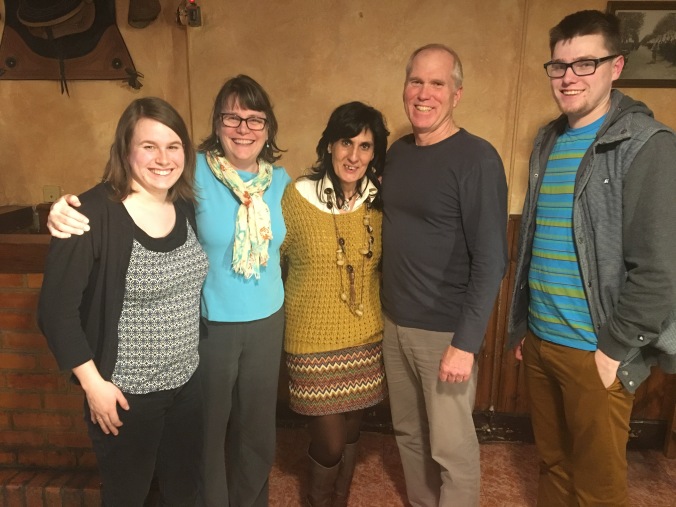 After some coffee and more chatting, we said our goodbyes and headed on the road. Everyone was pretty full from all the food, so there was some napping on the road and otherwise we went straight towards our destination.

We stopped in Madrid for the night, though we didn’t head into the city as it is hard to find parking and all, and we were all pretty exhausted anyways. So we stayed at another B&B near the airport. Everyone was tired, so we took advantage of the restaurant in the hotel and ate there. I had pizza and for the most part everyone enjoyed themselves even if it wasn’t fantastic food.

With full stomachs we headed off to bed to get some rest for the next day.

One thought on “A Visit with an Old Friend”

Loving this snow!!! ❄️☃️🌨 #nature #snow #winter #idahome
Treat yourself (in moderation)! Made a mini cheesecake in my instantpot today! Good to have a little treat to finish off the winter holidays. #food #delicious #instantpot
Some of us enjoy holiday lights even after New Year’s. Glad it stopped raining for a bit! #christmaslights #holidays #idahome
What a year! I managed to get out of the country in March before things shut down and traveled to Croatia, Slovenia, and Hungary. My job position of 3 years was eliminated after budget constraints after the pandemic, but I ended up finding work as an elementary school librarian which has been a fantastic fit. All of my colleagues have been so welcoming, and even with this weird year I have enjoyed getting books into kids hands and making the beautiful space my own. As well as a new job, my landlord opted to sell the property I had been living in forcing me to find a new apartment. However, the place I found in place is great and gives me great access to the greenbelt for fun walks, much needed in the quarantine. I started yoga and learning Spanish. I finished National Novel Writing Month for the fourth year in a row and read a hundred books. I definitely won’t miss 2020 but I am grateful for all the changes it brought to my life, most of which have proved to be for the better. Happy New Year everyone! #bye2020 #newyears
Recently the Anne Frank Memorial was vandalized. Today I went by it on my walk and was moved to tears to see the aftermath. It was Anne Frank who once said “In spite of everything I still believe that people are really good at heart.” It’s good to see some evidence of that at least. Thank you Boise for showing that people still care.
Beautiful afternoon walk #nature #Idahome #fall