“You’re skipping Christmas! Isn’t that against the law?” –Christmas with the Kranks

The above quote is from a family Christmas favorite that is pulled out to watch almost every year. Little did we realize how relevant it would be until this one.

So for any who haven’t seen it, Christmas with the Kranks is about a couple of empty nesters who decide to save themselves stress (and money) and go on a cruise instead of celebrating Christmas. Of course, their Christmas obsessed friends and neighbors are anything but understanding.

It’s a silly movie, and a humorous book, and it became even funnier when my family skipped Christmas to come see me. Little did we realize what that would entail.

My father had scheduled Granada as our stop for Christmas Eve, perhaps hoping that more things would be open in a larger city.

We actually first started with a stop near some windmills in a town called Consuegra.

It was sunny and beautiful and the family had a good time taking photos and being models and just enjoying the gorgeous scenery. One of the windmills was actually open, so we went inside and looked around it. 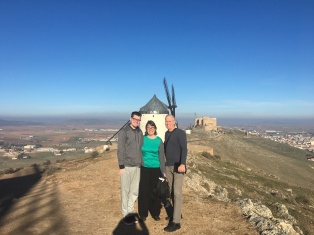 After that we were back on the road and heading for Granada. In the car on the way, we tried to look into what things would be open that we could do. Unfortunately, plenty of websites didn’t say, while others clearly stipulated that they were closed. The only exception was the Alhambra.

We arrived in Granada and after some struggles getting into a very tiny spot in the parking garage near our hotel, we headed to the hotel Posada del Toro where we were staying the night. It was a cute little local place on a quiet pedestrian street, and close enough to walk to a lot of the main parts of the city.

The bull in our hotel

We started by heading to a nearby church where Ferdinand and Isabella are buried, but of course, due to Christmas Eve it was closed so we couldn’t go in. So we were left to head towards the Alhambra where we’d reserved tickets already.

After some confusion in finding the right bus to take, we hopped onto a tiny little city bus and headed up the hill towards the magnificent palace.

Our father ran to grab our tickets for the gardens, since we hadn’t been able to get reservations to see the inside of the palace. However, when he came back he was delighted to tell us that he’d asked and they actually had cancellations so we would be able to see the palace after all! So hey, never hurts to check somewhere if you can possibly get in. You never know, things might just work out.

We had about half an hour until our scheduled time to go in, so we figured we were safe to spend some time wandering around the grounds first.

After snapping some photos and enjoying the scenery, we decided it might be good to head towards where we were supposed to be for our visit.

Unfortunately, what we hadn’t realized was that the gardens weren’t really close by the line to get into the Alhambra.

So we might have had a slight panic, and had to run to get to our line. Afterwards we all sort of realized it was a waste of time, as the main thing the time indicator did on your ticket was made sure you couldn’t go into the building too early.

My poor brother had already been to the Alhambra before, having visited with his school orchestra when they did a tour in Spain. So he was a bit bored. However, the rest of the family was awed by the gorgeous architecture and we had a very enjoyable afternoon seeing the place.

After some debate about what to do for dinner, the family agreed to head back to our hotel and ask for a recommendation. We weren’t sure how much would be open for Christmas Eve.

It turned out plenty of places were open, but many were crowded and didn’t have enough sitting room for four. Everyone was tired and hungry, so we ended up settling for a kebab place out of desperation to have some food and sit down inside for a bit.

My brother and I were both exhausted. He was sick. So both of us decided that we were feeling too worn out to go to the midnight mass at the cathedral. So after walking around the city a little more by night, we headed back to our hotel to rest up.

So that was our night before Christmas. I suppose the thing to remember for the holidays abroad, is it doesn’t matter so much what things you get to see (because most of them will be closed), but who you spend time with, and how you make the most of the situations you’re in at the time.

One thought on “Christmas Eve in Granada”