So, as I’ve just finished up writing about my last round of travel so it’s time to start another round.

For Christmas vacation my family came to visit me in France! The joke is that my family never ever does a relaxing vacation. On the first day, my brother remarked that couldn’t we just have a relaxing rest at a resort instead of our usual crazy rush from one city to another. My joke, the one time my family tried a vacation on a beach in Mexico a few years ago, we all became sick and weren’t able to go to the beach due to an incoming hurricane. So yes, it’s been concluded that my family is not allowed to have a restful time traveling. We must always be moving or we will invoke some kind of unknown deity’s wrath. The family curse I tell you.

Therefore, I invite you to follow the next few weeks worth of blogs to hear the full experience of this trip. It was almost two weeks long, and covered five (six…unsure on technicalities) countries, and multiple different cities, all while celebrating the holidays. So there should be some very interesting posts to come. They might seem a little crazy at times, but I hope you can enjoy hearing a little bit about our adventures.

The first day of the trip isn’t all that interesting for two reasons. One, long drives down towards the Spanish border. And two…jetlag.

So my family flew into Paris Thursday morning, and I took a train down to meet them from Lille. It’s about an hour train, but of course my luck was it was delayed…and my family’s  plane happened to be early. Just my luck. So I ended up waiting in the train station for more than an hour at seven in the morning (think five AM wake up to be there on time).

Finally, finally, the train arrived and I was able to board and head in the direction of Paris. Thank heavens for the modern convenience of fast trains. About an hour later, I was safely in the big city, wandering through the large corridors of the Charles de Gaulle airport, eagerly awaiting the sight of the people I hadn’t seen since September. To say I was excited would be an understatement.

Sure enough, I found them still waiting for the rental car, so no harm was done in being late. After lots of hugs and getting our affairs in order, we went to find our cute little orange car and start off on our adventure.

The biggest part to start with was escaping Paris, trying to wind our way out of the congested roads and off towards the countryside. After several long periods of sitting in traffic, we finally made it onto our road and were on our way.

As I said earlier, one of the big obstacles was jetlag. My family was pretty much wiped out after such a long flight. None of them had slept well leading up to the trip, and all of them looked thoroughly exhausted. I at least was adjusted to the time, but had only slept three or four hours the night before in eager anticipation and with such an early morning. So, we ended up keeping it pretty leisurely for the first day.

We started with a quick stop at a grocery store to buy a picnic lunch. Well, picnic in the sense that we ate at little tables in the entryway to the store. It was rainy and gray and no one felt like trying to brave the poor weather to eat outside. So we devoured our food and were on our way once more.

We made a quick stop in Bourges, deciding to stretch our legs for a bit. There was a Christmas market going on as there are in many French towns, so we wandered amongst the booths before heading over to look into the big cathedral there. I thought the stained glass seemed particularly magnificent. Although I have seen hundreds of cathedrals now, I never tire of going into a new one. I can always find something that intrigues me in the grand halls of these beautiful old churches. 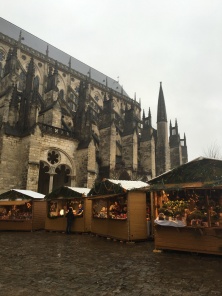 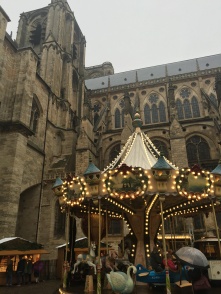 After that it was back on the road and towards Brive-la-Guillarde. We arrived late to our hotel. As my father did most of the research for hotels, I’ll list where we stayed, but I should warn readers that as I didn’t do research on lodging I’m not the best person to consult for recommendations. However, the challenge of finding cheap accommodation for four people in France can be difficult. Thankfully my family knows a few ways to keep it more budget. We stayed in a chain called B&B, a convenient “motel” like set up that keeps the prices down by having an automated check in system instead of a person at the desk.

We dropped our things off and went to find food.

So, you’ll notice very soon that I’m not always going to have a magical restaurant recommendation either. That’s because, my family has to find ways to be budget in order to travel. So admittedly, we do a lot of picnics for lunches…and a lot of cafeterias for dinner. So in Brive-La-Guillarde we ate at a local Flunch.

Honestly, it’s really a pretty good deal. For less than 50 euros, all four of us can eat a full meal with vegetables, meat, starches, desserts, and wine. It’s quick and convenient, and some of them are open all seven days of the week which can be very useful in a place like France that often has things closed on Sundays and even Mondays too.

After a filling but maybe not delicious dinner, the family went off to explore the city a little bit, mostly just walking around in the old town. It was very beautiful in the evening, though quite empty on a Thursday. Still, we enjoyed exploring the winding old pathways of the old city. These lamps seemed particularly beautiful to me, a sort of brief glimpse of magic in the empty roads.

So I can’t say a lot about either of these places, but what I will say is that going around and seeing smaller towns and cities can be fun too. They still have their charms, even if they don’t have their famous tourist sites.