So if you read my last post, you’ll know I had some changes to my travel plans, meaning most of my time in Zagreb was lost. However, all that meant was I was getting on the road earlier, ready to head off to my next destination: Budapest.

I’d actually been there before, but I found decent tickets flying home and honestly loved my time there before. I also felt like, the last time I was there, I was overwhelmed and didn’t get to see as much as I wanted. So, I was determined to go there a second time. To read about my first adventure in Budapest see this post.

I took off early from Zagreb. I had to miss breakfast at my hostel, but I figured early was better than late, especially since the borders had been so congested the day before.

On the bus it was mostly the same old thing. Enjoying views of the Croatian countryside and listening to audiobooks. Until we arrived at the Hungarian border,

Thankfully, there were hardly any other people there, so I was hoping we might get through faster.

However, this time they collected our passports to take them to be scanned, then handed them back one by one and as we went to get on the bus they took our temperature. Nothing like a spontaneous temperature check to get you sweating.

Thankfully, I wasn’t running a fever (and as I’m writing this nearly a month after can confirm I didn’t have Covid 19). So I was allowed to enter the bus and take my seat again. Only one person was held back, but I guess they double checked his temperature and it was fine so he was eventually allowed to take his seat.

The rest of the trip was uneventful, and soon I was pulling into to the bus station in Budapest. From there it was just a quick tram ride and then a long climb up a hill to my hotel, mostly ending up taking stairs since I neglected to properly read directions.

I was staying at a bed and breakfast called Budavar Pension, right next to Fisherman’s Bastion, a famous landmark on the hill. I thought it would be fun to stay on the Buda side of the river since my first time I’d stayed on the Pest side (for those who don’t know they were originally two separate towns on opposite sides of the Danube).

After checking in at my hotel and dropping my luggage, I opted to head to the Hungarian parliament building and see if I could get a tour. I booked quickly online to ensure my spot before heading in that direction. On my walk over, I enjoyed some of the views of the Danube and the bridges there and then meandered towards the parliament building, enjoying the sunshine.

For any who love beautiful architecture, I highly recommend seeing this amazing building. It’s huge and ornate, and the tour was very fun.

After that I wandered over to Margaret Island, a park in the middle of the Danube. It was very busy, but still a fun excursion.

Then it was back to the hotel to clean up for dinner. I especially enjoyed the view from my window as the lights of the Fisherman’s Bastion turned on. 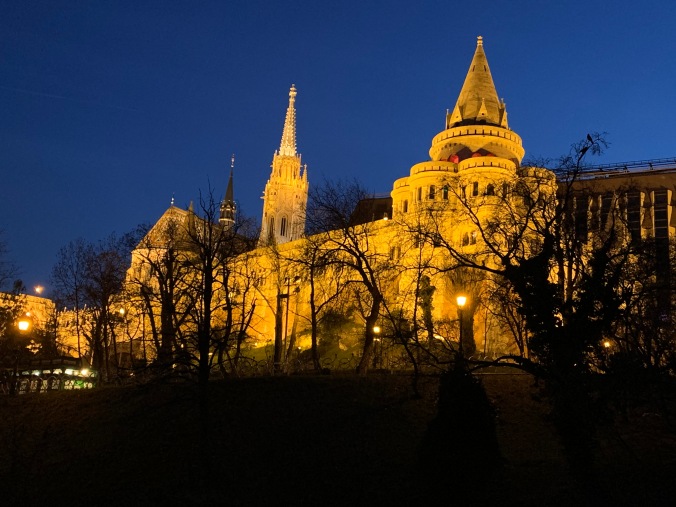 I decided to go to Paris Budapest, a French Hungarian fusion restaurant. It sounded different and wasn’t too far of a walk from my hotel, just down the large hill and right across the river.

The lighting was a little strange, so apologies for the not so great pictures, but nonetheless here is what I can tell you about my meal. I started off with a beet soup, supposedly using local and seasonal products. I love beets, so I enjoyed it pretty well. For my second course I had the duck, which is another of my favorite foods I don’t get much in the United States. And to finish off I had some kind of a caramel nut dessert. I had asked for a different one but the waiter talked me out of it. Regardless the meal was delicious and I enjoyed it.

Finished with my meal, I took back off for my hotel. I walked up the large hill and stopped at the Fisherman’s Bastion to enjoy the view of the city. And then it was off to my hotel to get a good night’s sleep. I had one more day left in Europe and was determined to enjoy it.

Felt well enough for a walk this afternoon. Got to love those fall colors! #idahome #fall #autumn #boise #nature
Love beautiful evening walks on the river and spotting the heron busy fishing 🎣 #idahome #boise
Experimenting with different salads in this summer heat 🥗☀️
Mom and baby deer siting on my walk today! So cute! 🦌 #nature #animals #idahome
Going vegetarian this week to make up for all the meat I ate last week. So here is my meal tonight. Heavenly Grain Bowl based on a recipe from my Blue Zones cookbook I’ve been enjoying. Veggies, beans, and chili peanut sauce on a bed of quinoa. Delicious and healthy! #healthylifestyle #food #yum #vegan
Got to love the beauty of summer. Perfect day for a walk in the park to enjoy. Those water lilies especially had me oohing and aahing. 🌷#flowers #nature #parks #idahome