I’d title this blogpost with my actual destination, but I feel like that would be false advertising as I actually spent pretty much no time in the place I ended up spending the night, and therefore don’t feel like I can give very good advice about it.

So,  I may have already mentioned in past posts that my experiences with Croatian and Slovenian buses varied. However, the one company I had a very bad time with was Flixbus, which was a pity because I found their website probably the easiest to use and they seemed to have quite a few options.

One of the reasons I made this statement was because a few days before this particular bus ride, I was informed it was cancelled. Rather than simply refunding me, the company asked me to call them (which is always fun when you’re roaming internationally) and get things squared away. I had no luck getting through to anyone and decided to just book another ticket and hope maybe I’d be refunded another time. Tickets at least aren’t too pricey.

So, as a result of this change, I had to take a later bus to get to Zagreb, my next destination. I’ll admit I’d given myself minimal time to begin with, mostly because the guidebooks I’d looked at hadn’t mentioned anything particularly exciting about the city. Other than being Croatia’s capitol, there wasn’t much that really excited me, especially after seeing some amazing historical sites like Zagreb and Split, and beautiful towns like Bled and Ljubljana. The main reason I chose to go, was that it would cut down on my travel time to my final destination of Budapest, where I was schedule to fly back to the states due to good deals I found on tickets. However, the bus change did effectively cut off the minimal time I had even more so.

Travel does involve some flexibility. So I decided to simply enjoy the fact that I could have a more leisurely morning up at Lake Bled. I enjoyed breakfast at my hotel, and then walked around the lake a little bit in the sunshine.

After a little bit of meandering I headed back to the bus stop. I had to make my way back down to Ljubljana before I could head to Zagreb.

Again I enjoyed the ride through the mountains with beautiful views on that particular sunny day.

Arriving in Ljubljana I was supposed to only have less than an hour to wait for my bus. I used the bathrooms in the train station (actually free–which in Europe is a bit of a novelty), and grabbed something to drink from a vending machine so I would be set for the bus.

However, the bus ended up being more than thirty minutes late. I boarded, heading up to the second story (as it was a double decker which I thought was fun). I had to shoo a lady out of my pre-booked seat, and felt a little bad, but as I had paid more I wasn’t going to be nice about it.

After that we set out. I listened to an audiobook and enjoyed the views out my window. And then we hit the border.

Now, this was March 11th. Coronavirus had just begun to spread worldwide and was beginning to create some panic. My mother in fact had messaged me mentioning that the US was shutting down borders, worried that I might not be able to get home (as I’m writing this at my house in the US I’ll go ahead and assure you that I did manage to get home safely).

And of course, this meant that in Europe borders were getting tighter as well.

At the border we sat there for maybe thirty minutes on the bus. They kept shutting off the engine to save energy, making it very stuffy on the top level. We got out of Slovenia no problem, but at the Croatian border, we were held up for a while.

Finally we were allowed off the bus to get in line to hand over our passports.

I watched in horror as five people ahead of me were pulled aside and told to wait. I could barely breathe as I handed over my passport, wondering if I too was somehow going to be pulled back. I hadn’t been to Italy or other places facing pretty extreme cases, but I wasn’t sure what their criteria were for pulling people.

Instead, I was waved through and headed over to wait with the rest of the passengers. We watched on as two of those held back were sent over to us, and then the other three were left standing awkwardly by the immigration booth. Two girls who looked maybe my age or younger, and then a young nun wearing a facemask. The three of them stood waiting for maybe fifteen or twenty minutes. I felt awful for the three of them, probably unsure what was happening. I was at least glad to be off the stuffy bus for the wait, even if I was watching the time and wondering when I’d be getting safely to Zagreb.

Sure enough, a few minutes later the girls came back over to join us and began to gather their bags from the bus. I eavesdropped a bit and heard that they had been told they needed to go into quarantine and could not pass the border. I guess both of them were from Germany, where the numbers of infections were higher at the moment, and for that reason weren’t being allowed into Croatia.

The bus driver, did at least kindly drive them (with all of the rest of us) back over the border and dropped them at a gas station and then did a loop to go back through.

The whole process was disconcerting and scary. I breathed a sigh of relief once we were through, but it put us more than an hour late on our schedule.

We arrived in Zagreb late in the afternoon, getting into evening time. Of course, the tram was packed with commuters, but I shoved my way on with my suitcase and paid for a ticket with the driver regardless.

Thankfully, a few minutes later we were in the commercial center and I was able to disembark and go find my hostel.

I was staying right across from the cathedral, which was beautiful. I did snap one picture of it before heading inside. Interestingly enough there was an earthquake there not long after my visit and I read that the cathedral suffered some damage. Even though it was a brief glance, I am glad I saw it before the quake. 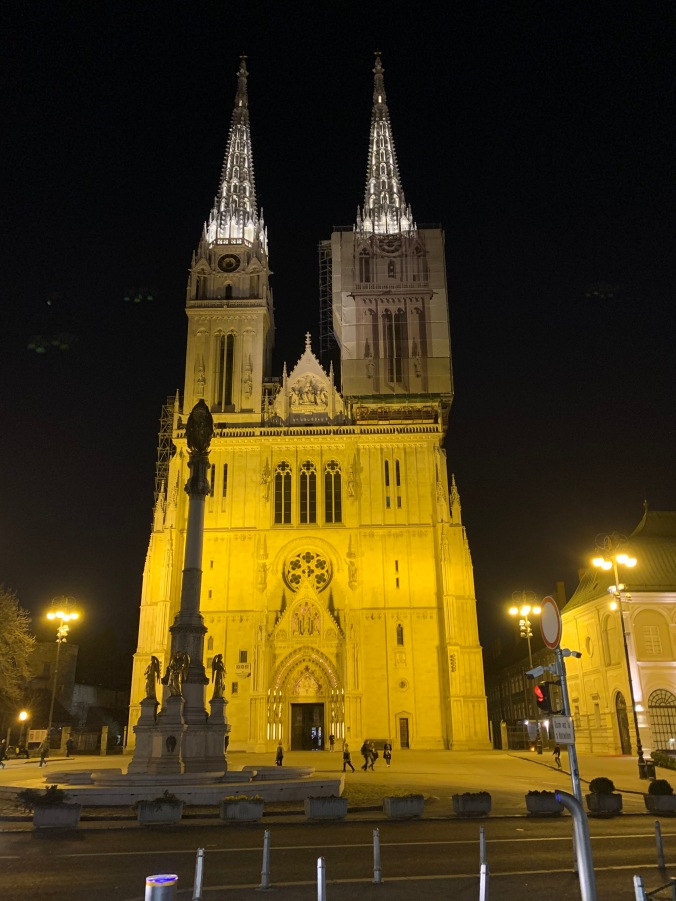 I stayed in Kaptol Hostel, though I went ahead and paid for a private room rather than doing a dorm. I’d opted to treat myself on the trip and pay a little more for privacy and a good night’s sleep.

Once checked in I put on some clean clothes and headed out to find a nice dinner. As it was my final night in Croatia, I wanted to use up all my kuna before heading over the border yet again.

So I headed out to find food. I’d asked at my hostel for a recommendation, but unfortunately they owned a restaurant down below and would only recommend that one to me. So I set off to find my own. Which is how I ended up at Restoran Lanterna na Dolcu.

I was the only one there, but they had good reviews, and the food sounded good. I took a seat down in their fun old cellar and had a glass of Croatian wine. 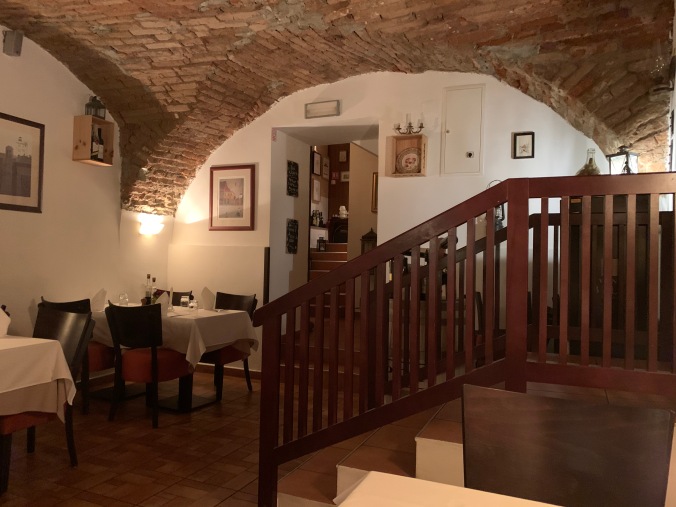 For a starter I had baked štrukli which was delicious. It’s a traditional Croatian dish with pastry dough, cream, cheese, and bacon. Super decadent and delicious!

For my next course I ended up with steak, yet again with mushrooms and vegetables. The waiter for some reason recommended I get a side of potatoes with it, which ended up being way too much food. But it did effectively use up my kuna. Unfortunately that left me with not enough for dessert, and besides I was pretty stuffed anyways. 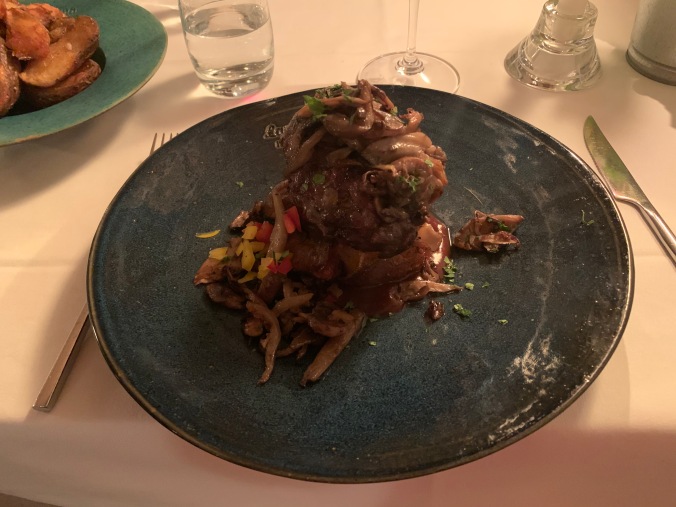 I paid my bill and then wandered around a little bit. I found a grocery store and picked up some lunch for the next day since I’d be on a bus about midday.

Then it was back to my hostel for a good night’s sleep, figuring at least in the morning I could maybe go see some things after breakfast.

Unfortunately, just as I was going to bed, I happened to check my email and sure enough had an email from Flixbus saying my ride the next day had been cancelled.

Less than 24 hours before I was scheduled to leave, they went ahead and cancelled my ride with no explanation. Again, I’m going to advocate based on my experiences with this company not to use them. They seem to be very unreliable, and they definitely messed up my time in Zagreb due to their unpredictable changes.

I looked over my options for alternate buses, and of course I could either leave very early in the morning, or late evening and get in after midnight. I was very disappointed about the prospect of literally getting no time in Zagreb, but knew arriving so late would be a bad idea. So I reluctantly booked a new ticket for 8 in the morning and rescheduled my alarm.

So as you can see, I cannot speak to Zagreb as a city. Due to unforeseen circumstances I didn’t end up getting to do anything more than walk around a bit, eat some good food, and sleep. Maybe one day I’ll get to go back, but that’s just part of travel. You can’t plan for everything and sometimes just have to go with the flow.