“Don’t Panic.”
― Douglas Adams, The Hitchhiker’s Guide to the Galaxy

I woke up early and had a big breakfast at my London hostel. Two omelets and some cereal and other things and I was ready to go! So I grabbed my stuff and headed to the bus station not too far away, which was in fact good luck considering the tube was down.

I hopped on my bus and headed to Cambridge! 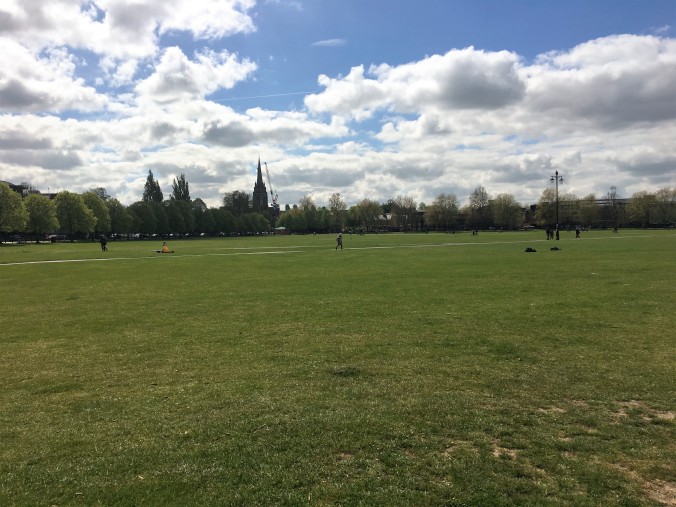 I highly recommend checking out National Express if you’re considering traveling around the U.K. without renting a car (and with the difference in driving…I know I probably wouldn’t be brave enough). They offer cheap bus service to a variety of cities, making it easy to get around. So I had about a two hour bus ride over to Cambridge, all for under 10 pounds. On the bus there were chargers, wifi, and decently comfy seats. All in all I was quite pleased with the find.

I arrived in Cambridge in the early afternoon. I headed over to my hostel to check my bags so I could get going with my day.

My hostel for the night was YHA Cambridge. It sadly was a little far from the city center, but in a nice residential area, so very quiet at night, which I appreciated. It was built in 2014, so everything was quite new and clean. All in all I had no real qualms with the place. They even offer a full hot breakfast for 6 pounds, but I skipped in favor of going to get some coffee and pastries instead.

Well, unfortunately there was a free walking tour at 2 PM from the city center. Google maps said it would take about 35 minutes to walk there. It was currently about 1:26 PM.

Let it never be forgotten that I can be crazy stubborn at times. Always have been. Probably always will be. Which is why I decided I was going to do that walking tour. Even if I exhausted myself getting there.

I took off at a brisk pace towards the city center. Basically running in places, otherwise just speed walking. 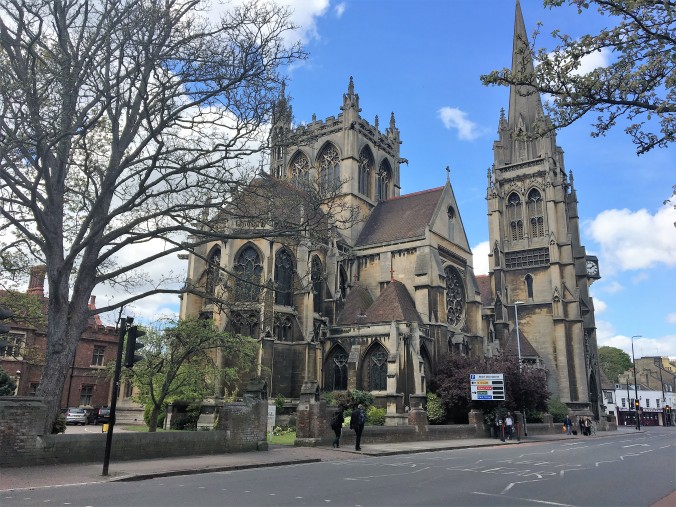 Sure enough I reached the walking tour about three minutes before it could begin. And thankfully there was room for me to hop on.

It was a company called Footprints and they do tours in a number of smaller English cities. It wasn’t quite the same level of amusement as like the Sandeman’s tour, but all in all it was quite informative and made it easy to see a number of the different colleges in Cambridge from the outside.

We began walking around and surveying some of the lovely scenic city with its beautiful colleges. And that was when my phone screen went black and wouldn’t turn back on no matter how many buttons I pushed.

The day before I had managed to drop it in water. I’d dried it off and it had seemed fine, but I realized standing with my tour group that it obviously wasn’t. And I began to start to worry.

I know I shouldn’t be so technology dependent, but I am. I keep my reservations on my phone (although I usually try to print a few backup copies if I can). I have my schedule on there, my train and bus times, my confirmation codes, my maps of the cities. It’s my means of calling people (I had service in nearly every country I visited thanks to T-Mobile’s great international plan), and even my only real means of telling the time, as I don’t usually have any kind of a watch with me. Plus, it’s my only means of taking photos as I do not own a camera, which as a traveler was one of the most horrifying things I could imagine.

So yes, in that moment there was a pretty significant amount of panic going through me as I followed along with the tour guide.

It was a tough decision, but I realized that if I quit the tour in that moment I’d highly regret it. So I opted to stay and head back to my hostel after it was finished. I had realized by that point I had my computer with me, so backups of all my schedules and codes and things. Plus I did have a small travel alarm clock for wake ups and time if I needed it. In short, I kept calm and carried on.

Sadly this is why my photos from Cambridge are lacking due to the phone not working during my tour.

Cambridge is quite the beautiful place. The old city and the amazing colleges (yes more than one) are all quite impressive. You can go on boat rides along the river, or just enjoy strolling around the city. Or if you have the time and the money you can visit the different colleges.

I didn’t do a lot of investigating, but I still haven’t heard of or seen anything that allows this… basically what I’ll say is that each college is going to charge you to visit, usually just their grounds and chapel, as the rest is in use by students. If there is a way to pay one type of ticket to visit multiple, I didn’t find it. My advice for both Oxford and Cambridge is to pick which ones you want to see and go for them.

I wanted to do King’s College, which has a marvelous chapel with a fabulous ceiling. However, with the tour there really wasn’t time after, so I had to skip. I did, however, visit Trinity College, which had a lovely courtyard and nice chapel you could see for 3 pounds (which was a bit cheaper than some of the others). Again, if you want to go in, pick one or two. Or maybe do a guided tour, but you’ll have to look into some good companies that do that.

After the tour I headed back to my hostel to try to fix my phone. Thankfully I did get it working again so that evening I headed out to revisit some of the places from the walking tour and get some photos (which is why there are some shown above).

Then I tried to find a place to eat and settled for the Cambridge Chop House, which was a local restaurant with a good selection of meats. Since it was the bank holiday, they were out of a lot of things, but that is the day after Easter for you I guess!

Regardless, I had blue cheese and squash balls, a delicious piece of chicken with peppers and potatoes, and a piece of raspberry and white chocolate cheese cake, all washed down with a Falstaff Cider that sounded good and was indeed quite delicious. The food was super good, and the location is fun right next to King’s College, though I was taken downstairs where there are no good views sadly. 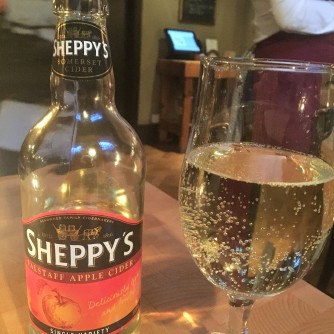 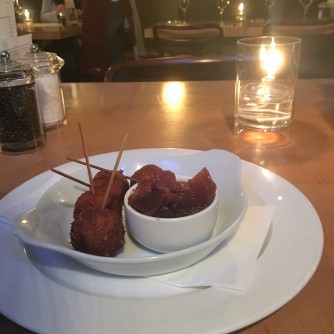 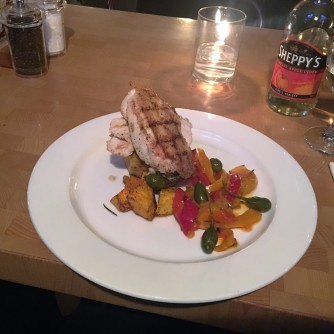 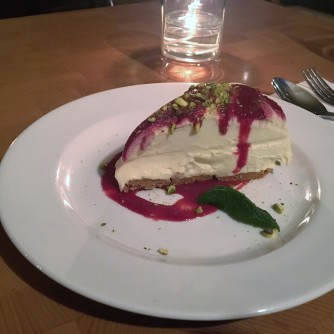 It was a bit of a splurge, but definitely fun and one of my favorite meals of the trip!

After that it was back to my hostel. I wish I’d had more time to explore the city a little better, but that’s life for you. Regardless I had a great experience and Cambridge is definitely a place I’d recommend seeing if you have some time in England!

Love beautiful evening walks on the river and spotting the heron busy fishing 🎣 #idahome #boise
Experimenting with different salads in this summer heat 🥗☀️
Mom and baby deer siting on my walk today! So cute! 🦌 #nature #animals #idahome
Going vegetarian this week to make up for all the meat I ate last week. So here is my meal tonight. Heavenly Grain Bowl based on a recipe from my Blue Zones cookbook I’ve been enjoying. Veggies, beans, and chili peanut sauce on a bed of quinoa. Delicious and healthy! #healthylifestyle #food #yum #vegan
Got to love the beauty of summer. Perfect day for a walk in the park to enjoy. Those water lilies especially had me oohing and aahing. 🌷#flowers #nature #parks #idahome
A little different from the Hawaiian beaches I got used to last week! 😄 #beaches #travel #oregoncoast