So I don’t work Tuesdays. It’s my day off thanks to my schedule. So, since school had recommenced on a Tuesday, I had the day to do what I wanted. My family decided that since I live so close to the Belgian border, it might be nice to take advantage of that and head over to explore yet another country.

My dad basically said, “Let’s go over, have some fries, beers, chocolates…” he thought for a moment, “and waffles.”

He insisted four things were weird and we needed a fifth, but we all reassured him that four amazing things all sounded really good.

We started off by driving over to Tournai. Mostly it was just an opportunity to walk around the main square and admire how pretty the town was. We did go into the Cathedral there and walked past the bell tower (it was closed for lunch so we couldn’t go in). Though it was cold, it was at least sunny, so we enjoyed the sunshine and made the most of our adventure. 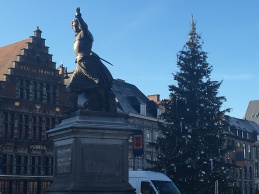 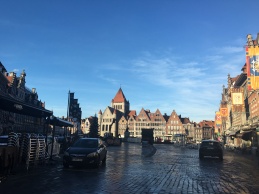 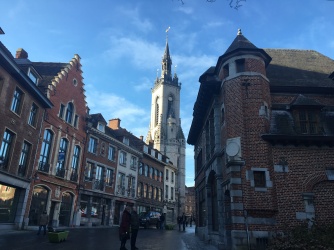 After a quick jaunt through Tournai we headed to Mons.

We walked to the main square and took some pictures, after which we decided to grab some food. We found a place that had fries and different sauces and grabbed a bunch of different beers to drink. We all thoroughly enjoyed it. 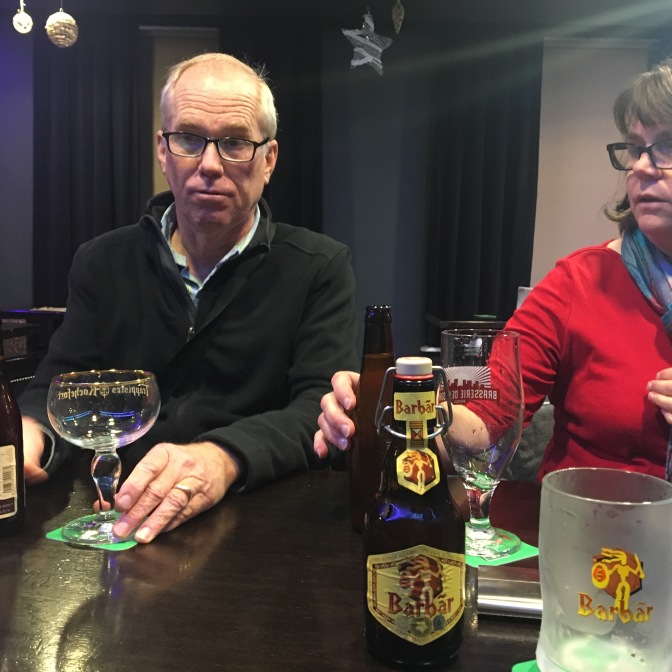 After that we had to go get our chocolate. We stopped by a store to pick up a mixed bag. And then we stopped in for waffles. My Belgian friend tells me these are sort of solely for tourists…but hey they are still fun, and I will never say no to waffles (yup call me Leslie Knope if you will).

We enjoyed the food and then decided it might be fun to walk around a little more, climbing up to a bell tower on the hill.

With plenty of time left, we opted to head over to a brewery nearby and see if they were open and then the ruins of an abbey that was supposed to be impressive.

The brewery was closed sure enough, so we just headed to the Aulne Abbey… or what was left of it. 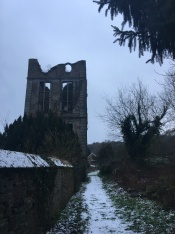 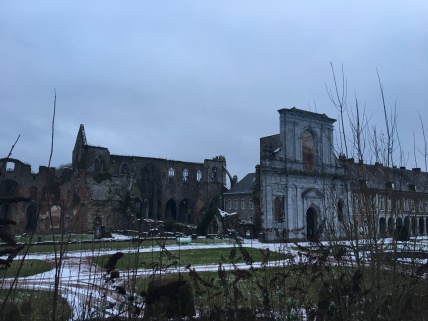 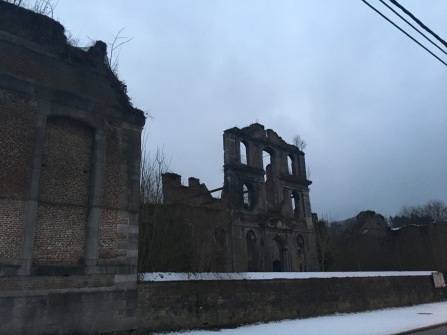 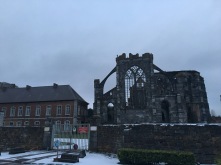 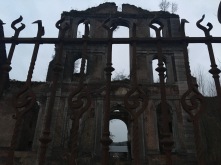 It looked like something out of a horror film. Ruins of an abbey in the snow. I admit I jumped a few times when I heard birds calling. Creepy for sure. It was closed for the season, but we were able to get some views over the fences.

My family drove me back to France. We stopped to grab some groceries and for another dinner at Flunch, because cheap and easy is nice sometimes.

After that it was back to my school to unpack and get ready for classes the next day. I had one more day with my family, and then the adventure would be over.

One thought on “Fries, Beers, Chocolates, and Waffles: A Belgian Adventure”