I am not even a little ashamed to admit I didn’t tell any of my teachers that I was going to Bratislava. After having my host mom get a little bit paranoid about me traveling last time (and that was with another person), I was not in the mood to have people start worrying about me. So as far as they know…I’m going to Austria and Germany…which is true…but not just Austria and Germany.

Why Bratislava? Because I wanted to ensure I saw some new things, not just new cities, but also new countries.

Ideally I actually wanted to go to Ljubljana in Slovenia. Because it is a bigger city and supposed to be up and coming as a tourist town. However, it put me way off track and I would have had to probably go through Italy. And I discovered last time that Italy on the Eurail pass sucks. Why? Because any train that takes you anywhere you need to go needs a reservation. Which costs more money and takes more time and effort.

So new country that was logically placed for this trip? Slovakia.

As my trip to Slovakia became closer I began to feel more and more nervous. It didn’t help that on my first night two of my roommates were in awe that I would dare to go to a more “eastern” European country by myself. I’ll have to post later on traveling alone as a woman, but that definitely did not put me at ease.

I’d done everything in my power to be prepared. Read a few things on Slovakia. Picked up an ebook of Slovak and other eastern European languages. Booked a hostel that was supposed to be excellent. But no matter how much preparation you do, there’s only so much you can ease anxiety.

I boarded my train and spent most of my ride simply trying to ease my worries. Everything was going to be fine. I was only going for a night. I could just hide in my hostel if need be right?

I arrived and immediately started feeling waves of anxiety as soon as I stepped off the train. The station itself was grubby and disorderly. Not in the way that most train stations are. There was a pile of dirt in the middle of the one of the floors with a few rails around it and no sign of anyone actually doing construction. I walked out the main doors and heard the chatter of a language I didn’t understand a single word of, and certainly couldn’t begin to speak. After having spent so much time in Prague, I’d become used to hearing a little English almost everywhere. Here I felt completely alone.

Feeling like I was maybe in over my head, I immediately decided to head towards my hostel. However, they’d told me to take tram 1. And in front of me I only saw buses. But maybe the hostel had mistranslated?

I didn’t really like the thought of taking the bus, but I would do so if need be. So I walked over and looked at the schedule.

No bus 1 listed. No anything 1 listed. All the numbers were 203 and 46. I looked at a map but again felt hopelessly lost. And most of it was covered in graffiti anyways.

I hesitated to ask directions. Did anyone even speak English here? I had no idea? Maybe. Would they respect me asking them that in English? I was feeling panicked so I headed back to towards the station and had a seat. A homeless man came over to bother me for money as I tried looking on my phone to see if there was any indication where a tram or bus 1 might be. My phone wasn’t giving me clues so I glanced at the hostel directions again. Sure enough it still said tram 1. I was toying with calling them. Or maybe trying to walk.

Just as I was beginning to feel hopeless I looked up and noticed a sign.

A bright yellow icon of what looked to be a tram.

I sprang to my feet and grabbed my bags and rushed towards this beautiful sign that was leading me back towards the station. I hustled onwards, trying to keep my smile in control even as I wanted to laugh and shout for joy.

Sure enough after heading down a long corridor and down some stairs I came to where a line of trams were waiting. One of them had the number one on its sign. I did my best to not start exclaiming my happiness as I stepped onto the transportation and settled into a seat.

I was surprised to see the tram was fairly modern looking. Decently clean too. Actually cleaner than some of the German transport I’d been on. And they even had the screens that play advertisements, showing several for tourist things and including English. I smiled as I began to realize it wasn’t as bad as I’d made it out to be. Clearly this place was trying. Perhaps it wasn’t quite the hellhole my imagination had made it out to be.

I arrived at my stop and walked a short ways to my hostel. I found it with no problems, which was another reason to celebrate. I headed up to the reception and checked in.

I stayed at Hostel Blues, which again had been given really good reviews, even won a Hoscar or two (yes that’s right…hostel awards…such things do exist). And sure enough I soon found out why. The price was really affordable for being right downtown, and it was really quick walking distance to the old town too. On top of that the staff was the friendliest and most helpful of any other hostel staff I have EVER encountered. So incredibly kind and warm.

The view from my hostel window!

They handed me a brochure on restaurants to try and different local foods I might enjoy, and pointed out various activities including a free walking tour they recommended. I’ve never had a hostel do this before, but when they handed me a map they went over it with me. Most just mark their hostel if anything, but Hostel Blues made a point of showing me what was good to see, asked how many nights I was staying, and told me the easiest ways to get around.

I headed off to the castle first. I’d read on Tripadvisor that it was a reconstruction, so I wasn’t particularly interested in going inside, and didn’t have time anyways if I was going to catch the walking tour. But I knew the views were supposed to be amazing, and I was right! It was a nice hike up the hill and then I enjoyed looking down at the city. 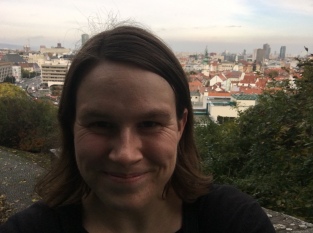 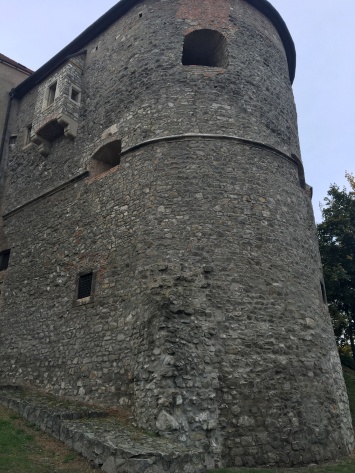 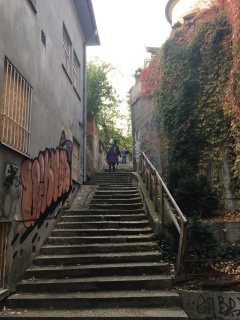 From there I headed down to meet the walking tour. For any looking it’s called Be Free Tours.

My hostel had said something about a statue, and I thought they’d said a man on a horse. But when I arrived at the square I could find no men on horses. And it was a big square too! Not the small little things I was used to. So I wandered up and down for a while trying to find a horse, only to see an orange sign and realizing I must have simply misheard.

Our guide was this small bubbly Slovak woman who was clearly very excited to share her country with us.

As Bratislava is not a really big place, she led us through the main sites, but she also took some time to share with us about Slovak history, culture, language, and food. In a bigger city I might have been annoyed by this, but I felt she showed us all the main points of the city that were close enough together to walk to, and found these additions a good way to balance and make it feel like we were getting our money’s worth. Plus her enthusiasm was simply contagious. No break, which I found unusual for a walking tour, but all in all I recommend it as a good way to get oriented if you are going to Bratislava.

She showed us the old town area, and the statue that’s supposed to bring you luck if you pat his head or babies if you rub his nose (I just patted his head thank you), and some of the other fun sites, before ending near the famous blue church.

After it was over, I tried to head to a restaurant that both the guide and my hostel had recommended after. But unfortunately there was no menu posted, which didn’t put me at ease with eating there. So I picked up a discount ticket for another place close to my hostel called the Slovak Pub where they were supposed to have a great example of the garlic soup, a local dish that was supposed to be tasty.

So I headed over there. Unfortunately, the only space left to sit was smoking room only. Times I truly dislike Europe, but I was hungry and not in the mood to go find another place, so I sat down and figured it made for a more real pub atmosphere. My clothes smelled for a few days after, but what’s laundry for anyways?

Anyhow, I ordered the garlic soup and some salad (hadn’t been getting enough green veggies that’s for sure) and a local beer.

The garlic soup arrived and I was so glad I hadn’t ordered anything else as a “main” dish because it was HUGE.

Overall it wasn’t my favorite unfortunately. I’m not a big garlic fan if it’s not mixed in with other flavors, and I didn’t feel there was much else to flavor the soup. Very creamy and filling, but just not really to my palate, and there was WAY too much bread to possibly finish.

After that I headed back to my hostel.

So overall would I recommend a stop in Bratislava? Well I can tell you (since I’m not really writing in real time) that I ran into not one, not two, but THREE groups from my Bratislava walking tour in Budapest (one of which was in my same room at my hostel…what the heck). So this is quite a common thing to do. I honestly think it’s a fun way to get a taste of another culture, and it makes for a very logical stop between Prague and Budapest.

Overall, I enjoyed myself, but probably wouldn’t have stayed a lot longer. Maybe one more day to see a few museums that I missed. So yes, I’d recommend it if you’re looking to add something different between some stops. Would I say you should go to Bratislava all by itself? Probably not worth the money, but it’s up to you! The main thing I’d say is I was more comfortable than I’d expected there. Certainly a little more out of my comfort zone than in “western” Europe, but still much better than I might have thought. So for any with similar anxieties, don’t you worry too much. Bratislava is a nice place, and I’m glad I had a chance to stop by!

One thought on “Did I Make a Mistake? A Trip to Bratislava”