So there were two repeat cities on my trip. However, one was more repetition than the other. I’ve been to Prague twice already.

That’s not to say you can’t enjoy a place you’ve been before. Honestly, I wouldn’t be on this voyage at all if I didn’t love France and it is technically my fifth time in the country…and my fourth time “living” here.

My first time visiting Prague was in 2011 with my high school orchestra. We did a European tour where we played in three cities and had chances to explore and see some of Europe too. I had a walking tour and saw most of the main sites then. 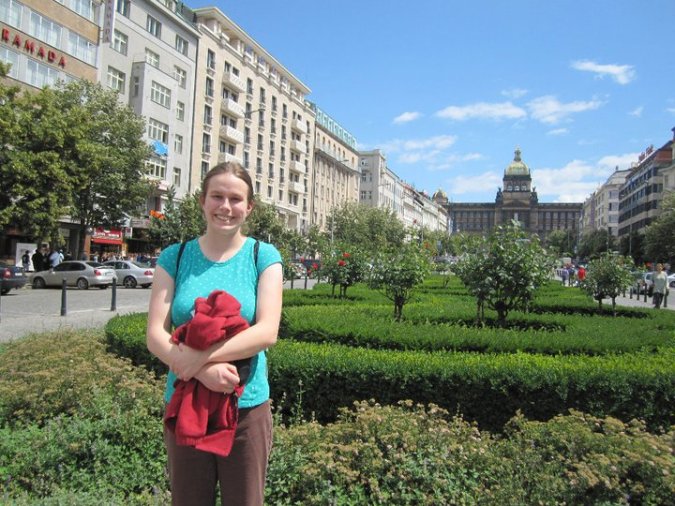 My second time was with a friend during study abroad in 2014. Like this trip, we’d decided to do a two week Eurail journey. Prague was a good stopping point, and since she’d never been there it made sense. We only spent a day there, and since she had never been to Prague we again stopped by most of the main sites. Also apparently there are NO pictures of me. Not sure why. Guess pics or it didn’t happen? So I’ve only been to Prague twice? Well, regardless you’ll just have to trust me.

So third time in Prague? What to do? Well, when I’ve visited Paris again I usually try to go see new things. I had a friend comment that she was sick of going to Paris. She’d already seen the Louvre and the Eiffel Tower and seemed to imply that was all there was to see. I disagree. There are so many museums in the city. So many different historical sites that are off the beaten path. And I’m sure the same goes for a big city like Prague… it’s only a matter of knowing what they are. 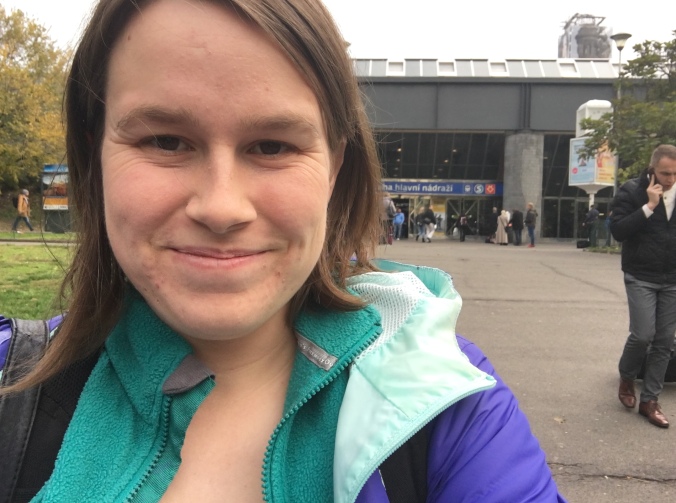 3rd time in Prague. Hair is blocking the “Praha” part of the sign.

I admit I didn’t research as well as I probably should have, so when I arrived in Prague the first thing that sprang to mind was the big museum on Wenceslas Square. The first time I’d been there our guide had pointed it out. Sounded interesting to me.

So I arrived at my hostel early that afternoon. They’d mentioned free walking tours on their website, so I asked at the front desk. “Oh sorry those leave at two.”

I looked at the clock. It was well after two. Oh well, I’d seen most of the points they’d probably cover anyways.

I relaxed in my room for a bit. Oh my goodness, my cheapest hostel but the nicest by far. Looked more like a hotel with bunk beds than a hostel. Anyhow, so if anyone is looking for a good centrally located hostel for not too much money and a free breakfast I invite you to check out Hostel Orange. Perfect location!

Anyhow, I set out after a quick break to go check out the National Museum on Wenceslas Square. It’s a big square, so it probably was still two blocks from my hostel crazily enough. I arrived and was confused that I didn’t see any entrances into the building. It looked like they were doing construction, so I didn’t understand why there weren’t signs telling tourists what entrance to use.

I walked a little more and noticed a newer building that had signs about being the National Museum. I perked up and headed towards that, glancing at the prices and pulling out enough Czech crowns before heading in.

I asked the lady for a ticket and she looked at me blandly and handed over two pamphlets.

“You can only visit these special exhibitions.”

I frowned and looked them over. One was on fashion and the other on Noah’s Ark. Perhaps interesting, but not what I’d come to see.

“But I want a ticket for the main museum,” I explained.

“This is all that is open right now,” she said pursing her lips.

I thanked her and turned to the door, feeling utterly confused.

Looked it up later. The museum is closed for renovations other than special exhibitions and has been since 2011. It’s supposed to open in 2018. I couldn’t believe it, but it’s true. So to anyone going to Prague in the next few years. Don’t try to go to this museum.

Although I did look it up and there are other museums that are housing some of the collections right now, so check out the list and see if any match your interests.

Well with that not a possibility,  I walked back into the square trying to think of what I else I knew there was to do in Prague. I knew there was a Museum of Communism, which honestly was a very relevant topic to the city and I figured it might be worth trying. 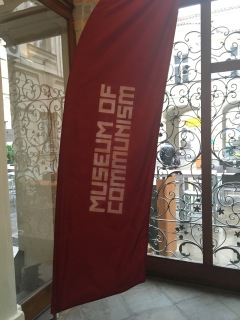 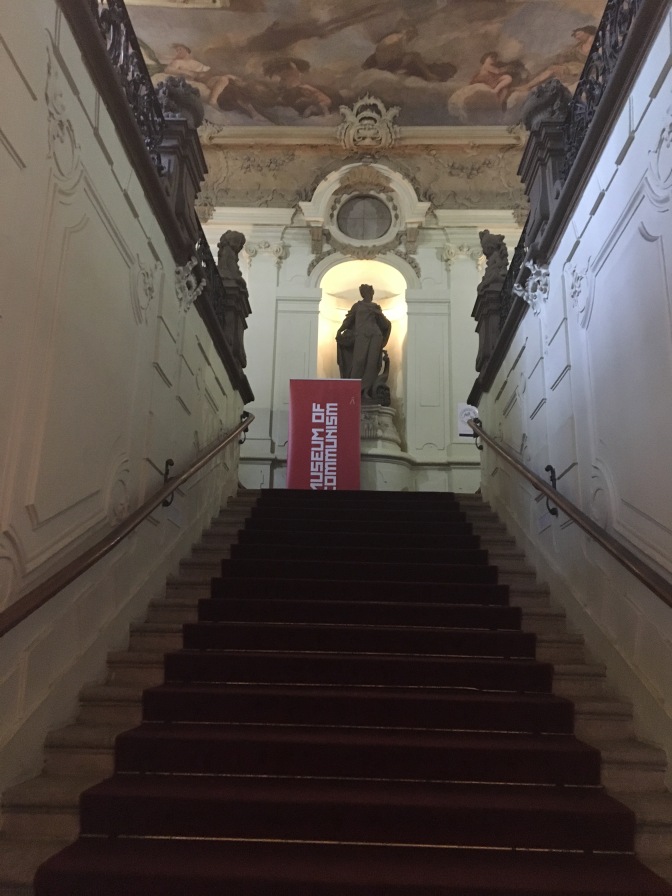 So off I headed in search of this other museum.

The Museum of Communism was interesting, but it’s not something I’d highly recommend especially if you haven’t seen the main things (IE Old Town, Prague Castle, St. Charle’s Bridge, St. Stephen’s Cathedral, the astronomical clock tower, etc). It’s not really a very modern looking museum. Most of the signage is pretty outdated and it’s mostly just a lot of reading rather than anything more visually interesting. I know I know, I’ve been spoiled by some really nice museums, so when I get to the less fancy ones I’m always a little disappointed.

Again, a very relevant topic, however, so fellow people who’ve been to Prague more than once, yes you might want to check it out.

After that I simply walked around the old town a little. Bought some ice cream and relaxed. It was nice in some ways to be somewhere where I didn’t feel like I had to see everything. So I just enjoyed that no rush feel and let it carry me into the evening.

I went to find a place to eat in the evening. I walked towards a restaurant my hostel had suggested. They provided me with a list which was awesome! I am in love with hostels that give you detailed information about what to see and do in a city. Nothing better than having some idea of what you might want to do…or eat!

Anyhow, I arrived and for some reason couldn’t find the restaurant. By the time I figured it out, I realized it looked to be more of a bar. Which wasn’t really what I was interested in for the evening. So I turned around and decided to try something else. That’s life traveling. You always have to be willing to be flexible.

Thanks to my list I knew there were several other places that were supposed to be good. Including a place on the Old Town Square itself!

It was called Staroměstská Restaurace. I had been told that if you eat on the terrace it’s twice as expensive. However, having taken out my normal budget in Czech Crowns (about 50-60 euros a night) I had quickly realized I wasn’t going to spend that because everything was much cheaper. So I was willing to sit on the terrace if need be. Only it was full, so I ended up inside. It was still a cute restaurant even without being out on the square. So I settled back and tried to decide what to eat. 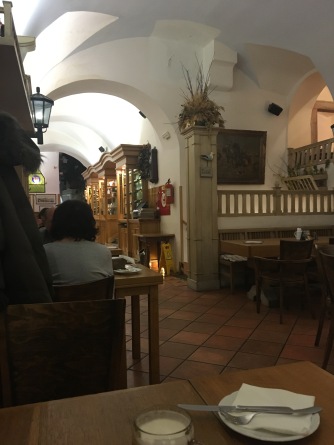 The first time I was in Prague my tour group ate at a traditional restaurant one of our nights. I didn’t like the food very much. Which led me to a lifelong assumption that I didn’t like Czech food. The second time I visited Prague I convinced my travel friend that Czech food is awful. And we got Italian instead.

So I was hesitant to try Czech food, but I was trying to be brave and try things again, because I have found before that even if I didn’t like something initially…I might like it trying again.

So I looked over the menu and listed in the chef’s specialties was a “Moravian wedding plate” which sounded huge but also sounded like it would have a variety.

If you hadn’t noticed already, I haven’t been mentioning lunch at all. That’s because most days I haven’t been eating lunch. I usually am stuck on a train during lunch time, meaning I have to pay for more expensive and possibly not as tasty train food (also needing to leave my bags and things unattended at my seat), or wait and try to find something once I arrive, which cuts into my tour time. So I usually have been having some snacks on the train and then eating a lot for dinner. And in places like Germany and the Czech Republic, I can usually get large portions pretty easily and cheaply.

So I went ahead and ordered it anyways, figuring I’d probably be able to eat most. The plate included a quarter of a duck, bacon dumplings, bread dumplings, potato dumplings, smoked pork, roasted pork, and red and white cabbage.

And I asked the waiter what he recommended to drink and he just pointed at beer, so I ordered one of those too. I said small, so either this is what Czechs think is small, or he misunderstood, but regardless it was decent tasting and paired nicely with the meal. 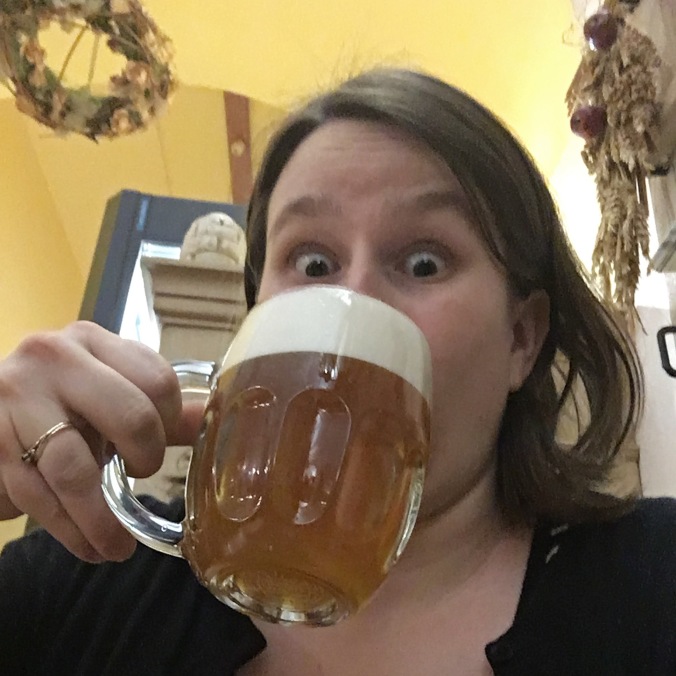 Best meal of the trip so far! So incredible tasting. So just a reminder to readers to try things a second time, because sometimes you’ll change your mind. And also remember with food that sometimes a different restaurant can make a big difference!

After that I headed back to my hostel to get a good night’s sleep and tried to think about how to spend the rest of the crowns I’d withdrawn since I didn’t use all of them. For any wondering, Prague is cheap so you don’t need to take out as much money as you might in another big city…or just do a credit card…makes it easier.

Not a very full day, but regardless a good experience. Very glad I went to Prague. Maybe by the time I go back again that museum will finally be open.

And the next day is the real adventure… Bratislava.

One thought on “There and Back Again: Prague”

Happy Earth Day! So grateful to have seen so many amazing natural wonders. Hope we can continue to protect and preserve our beautiful planet so future generations can enjoy sights like these (yes all the animals featured are wild).
Love the beauty of the walks along the river #idahome #flowers #outdoors #nofilter
Not an April Fools! I really did finally cut my hair again. Feels so good to have it short for spring!
The zoo wasn’t enough animals for us so we had to check out Tracy Aviary as well. Check out all these beautiful birds! Turns out some of their species are now pretty much extinct in the wild. Places like this aviary help to try to revitalize these populations. Such beautiful creatures! It was a privilege to get to enjoy their beauty and support conservation that will continue to protect and restore ecosystems. #animals #birds #travel
We made it! Steep climb but somehow we got to the top to enjoy the beautiful city views!
Beautiful day at the zoo! Lots of amazing animals and sunshine to enjoy! #travel #zoo #animals