I couldn’t resist a Split pun, because of course my next trip destination is Split, Croatia!

I woke in Dubrovnik to pouring rain. I gathered my things, put on my raincoat and headed off to the nearby bus stop to catch a ride to the autobus station where I could catch my bus to Split, a city north of Dubrovnik.

Now some might ask why I didn’t just rent a car. I will admit driving is one of my least favorite activities even in my hometown. On top of that, it’s very cheap and pretty easy to get bus tickets in Europe, saving some money. And of course once you’re in the big city it’s usually easier not to have a car anyways and to rely on public transportation. Which was what I opted to do.

Now, I consider myself to be fairly adept at utilizing public transport, but I will admit city buses tend to be the form that gives me the most trouble. So, thinking I’d be proactive I asked the driver if the bus was going to the autobus station. He nodded and I went back and found a spot to stand with my suitcase.

I kept an eye out on my phone to try to see where approximately I might need to get off. However, I watched in surprise as the bus zoomed right by the autobus station. I had a brief moment where I thought maybe the bus stop was a few meters further down the road, but as I watched my dot on the map moving out of Dubrovnik and heading for the next town in the metropolitan area, I realized I had clearly missed my stop. I pressed the button to request a stop and watched as the bus driver looked back in time to see me and throw up his hands in disgust.

I got off at the next stop, finding myself back in the pouring rain. I had left early thankfully, but looking at my phone it still approximated at least a fifteen minute walk back to the station. I was just about to panic when I realized my bus ticket covered transfers, so I could technically go over to the stop on the other side of the road and catch the bus back into town.

Thankfully, another bus pulled up shortly after and I managed to get off at the appropriate stop. I breathed a sigh of relief before going to find my bus to Split.

I used several different bus chains during my travels, but my first I started with was Arriva. All in all they are actually my top recommendation for anyone travelling by bus in Croatia.

I spent the drive listening to audiobooks and looking out the windows. I actually found it kind of fun because we drove through Bosnia and Herzegovina.

Due to how the borders are drawn Croatia actually is not all interconnected. Bosnia has a small strip of shore access at the city of Neum. So delightfully in driving from Dubrovnik to Split you get to stop to cross into Bosnia and then maybe ten or fifteen minutes later you get to stop to cross back into Croatia. Interesting experience to be sure.

Other than that the drive was uneventful. I arrived in Split in the early afternoon and thankfully it had stopped raining. I found my way to my room for the night called Ziggy Star. It was interesting because I had mistakenly assumed it was some kind of hotel or b & b but it actually was just a single room in the old town, not unlike an airbnb. It did come with the advantage of breakfast at a local cafe in the morning though and was altogether a great location for a stay.

After my stuff was dropped off, I decided since the weather was so lovely I’d take advantage of the sunshine and head to a local park. Marjan Forest Park is a coastal hill right near the main city that you can climb for fantastic views as well as beaches and fun wandering trails.

I ended up spending several hours wandering the hill. I think I ended up walking about eight miles. It was fantastic. The views were beautiful and I even dipped my aching feet into the Adriatic (it wasn’t warm enough for anything beyond that).

Tired out I took a break at my room and then cleaned up to go to dinner. I decided to try Bokeria, a restaurant in the old town I’d heard good things about. It ended up being one of my favorite dinners of the trip.

I had a “bruschetta” which was actually pears with Gorgonzola, balsamic glaze, and nuts on toasted bread. Then for my main course I had “ravioli” which was more pastry like rather than like pasta filled with wild game meat. And then for dessert this yummy little white chocolate raspberry coconut treat. And of course a glass of local Croatian wine as well! 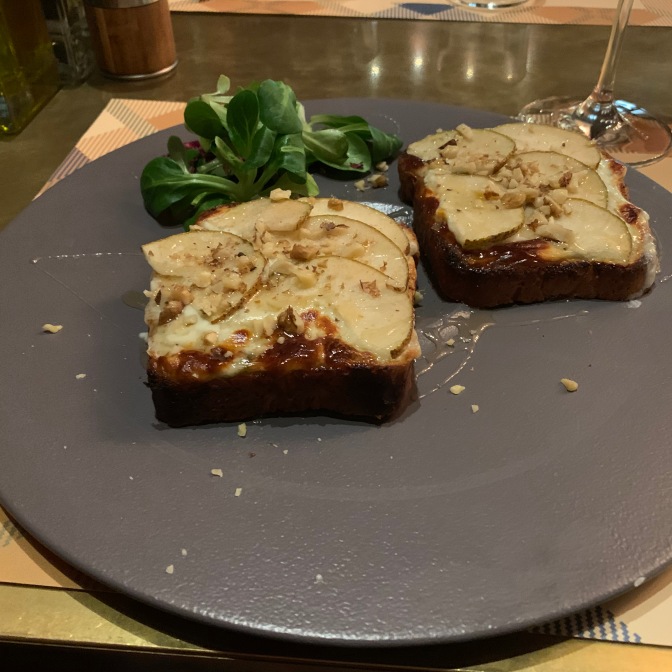 After eating well, I headed back to my place for a good night’s sleep.

Thanks for reading about my second day of my adventure! Hopefully I will have more up soon.

I did have a question on my last post which was “Why Croatia?”

Well, the most simple answer comes down to these criteria. I wanted a place that:

Croatia ended up fitting all of those things pretty well at the time. It’s a pretty safe country. In the off-season it’s not quite as expensive. And I’d never been there but had always heard good things. I found a pretty budget flight and the pieces just all fell together!

Feel free to ask other questions and I’ll do my best to answer in the next few posts.