I woke up in my lovely studio on the island of Crete and felt like I’d stepped into some kind of dream. Greece itself has always seemed like some kind of fantasy land to me, but to actually be there, waking up and looking out my window to see the sun shining on the sea, illuminating the mountains and the fields, it was exhilarating. 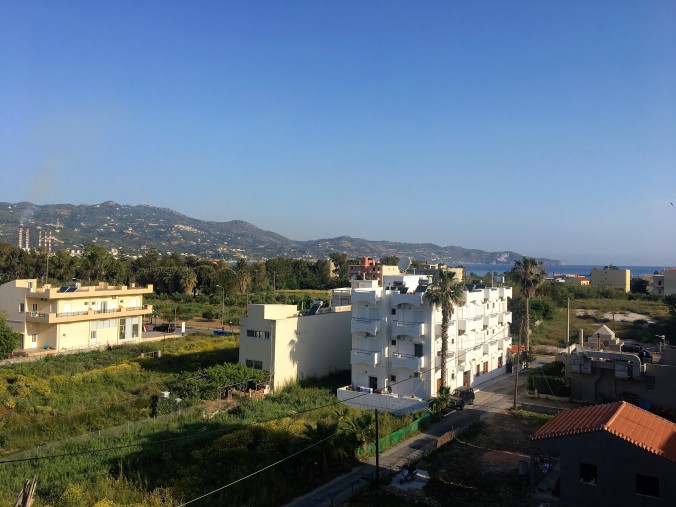 I had breakfast on my balcony and sunscreened up before heading downstairs. I had opted to wear shorts, even though I knew this made me clearly stand out as a tourist. It was just too hot and I knew i was going to be outside for much of the day.

I’d opted to spend my morning going to explore the ancient city of Knossos.

It was one of the things that had drawn me to Crete in the first place. When planning my Greece trip I’d googled recommendations of the best places to see, and Crete was featured on quite a few lists, so I knew I had to get there.

So Knossos was a top priority to see as it was supposed to be one of the most important places on the island.

If you’re there in the summer there is a bus directly from Amoudara to Knossos, but in the off season it required a ride into Heraklion and a transfer from there. Thankfully it wasn’t too hard to figure out.

After arriving I headed into the gates. There was quite a line, but I wasn’t deterred. It wasn’t cheap, and as I wasn’t sure I was going to the archaeology museum I didn’t bother to buy a joint ticket (this ended up being a good choice).

The palace ruins stretched out before me. There were guides hovering offering tours for extra money, but I opted to walk around and read signs.

I soon found out Knossos was not quite as exciting as I’d anticipated.

It was also just really crowded. I couldn’t imagine what it would be like in full tourist season.

Anyhow, to any planning on going I recommend good walking shoes, plenty of sunscreen, and willingness to use your elbows.

After finishing wandering the various parts of the palace, I headed back out and went to the bus. I took it back to Heraklion where I decided to find some place for lunch.

I ended up at a place right near the harbor. It was obvious I shouldn’t have gone in. The waiter was far too eager to get me through the door, but I didn’t really care. I had a pretty greasy and not very good gyro, but it was at least filling. 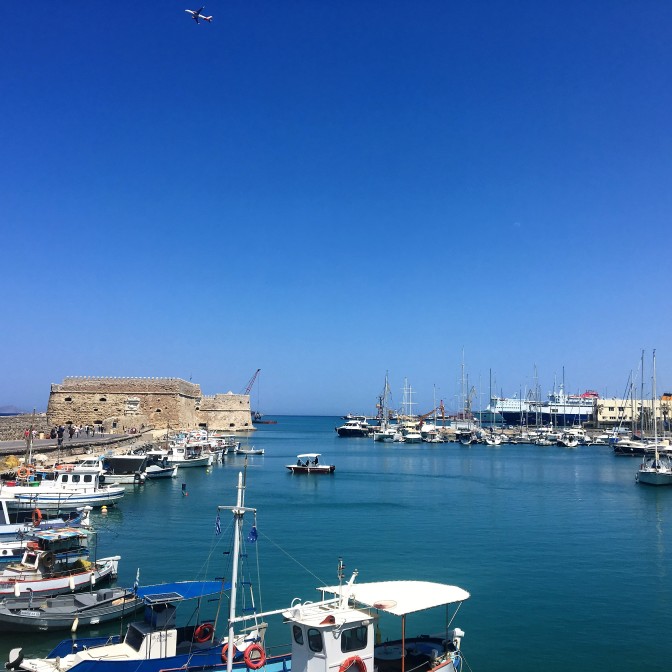 After finishing my meal I headed down to the harbor to walk around. I was feeling a little poor after going to Knossos, so I opted to just look at the outside of the Phoenician fort instead of paying to go in. I then walked back up the hill to the walls surrounding the city where I took a nice long walk. It had beautiful views and I really enjoyed myself. 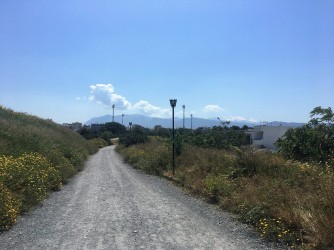 I spent a little longer in the city before boarding a bus back towards my hostel.

I changed into my suit back in my room and headed down to the beach. It was less than a five minute walk down to the sand. I found a free spot to lay my towel, and I sat and looked out at the water.

I did wade a little, but it was too cool to really enjoy swimming.

After lounging for a bit I went back to the pool where I dipped in for a bit, but again was too cold to really last. Besides, I couldn’t shake my old swimming lessons as a child where the first rule was “never swim alone.” Hard to do as a solo traveler.

I went upstairs and showered before throwing on a skirt and top and heading to dinner. I’d seen good trip advisor reviews about a tavern down the road, so I walked down to find this quaint little place with a lovely porch. It was the perfect setting for an evening meal. I had meatballs in a sauce with rice. 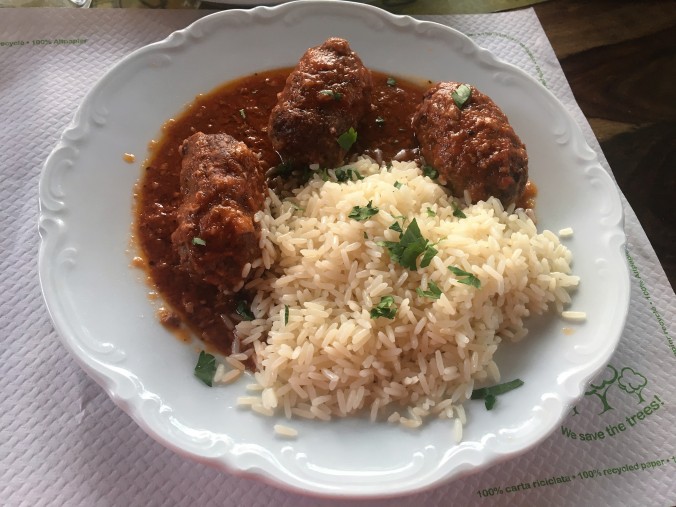 I was given a free dessert again, but I was still slightly hungry walking back, so I picked up an ice cream cone at a shop on the way and took it back to eat on my balcony as I watched the sunset. I couldn’t have asked for anything more perfect.

I had a roommate that evening, she was from Denmark and we exchanged advice about traveling.

And then I headed to bed, because I had an early morning coming to get to Santorini the next day.