So I woke early to get going out of my hostel. I had breakfast first, a surprisingly filling fare for an included meal. Waffles and scrambled eggs, meats, cheeses, olives, fruits, bread, spreads, coffee, hot chocolate, tea, juice, and water. My word what a feast! I ate my fill before checking out.

I debated calling a cab to get to the bus station. Honestly, it wouldn’t have been very expensive, but I had overestimated my time so I had a good hour left until my bus was leaving, so I opted to walk.

I used thirty minutes to get to the station. I was already a little confused stepping in. A  lot of the signs were only in the cyrillic script of Bulgarian. So I thankfully found the desk of the bus company I booked and asked them where I should be.

They spoke enough English to help and got me to my platform in time to hop on my bus.

While it was a bit confusing and not a lot of directions were given in English, the bus itself was quite nice. Decently comfy seats, chargers, and even wifi (though you had to ask for directions on that…and I really didn’t care that much as T-Mobile was still providing me with cell service), plus screens to watch tv in Bulgarian if you desired. And then even more surprisingly the driver came through with snacks and drinks that were apparently all included. Yay for that.

We had one stop in the middle to use toilets (aka holes in the ground) and buy snacks if we wanted before getting back on the bus.

The only other stop we made was at the border. I was a bit scared because the border guard just took my passport from me and left the bus. He was going to get it stamped, but for a moment I was afraid I wasn’t going to get it back since I was one of the few non EU people on the bus.

Thankfully he did bring it back with a new stamp making it clear that I’d been to Greece! Yay for more passport stamps.

Now the last part is the confusing one. I’m pretty sure I got off at the wrong stop.

The bus did stop a few places to pick up passengers, but the driver never said anything.

In Thessaloniki (yes I could see on the map on my phone) the driver turned and said something. Since I could see we were in the town, albeit about fifteen minutes early I climbed off, even though most passengers appeared to still be sitting there.

Well, the bus station that I’d googled prior to arriving was maybe a 3 kilometer walk from my hostel. That wasn’t ideal but was doable. With the holiday I knew it was unlikely I’d be able to get a bus. The station I was at was much further, so not possibly walkable, or at least not if I wanted time and energy to see the city.

Thankfully I had a list of directions for a taxi driver, so they were able to understand where I needed to go. So I opted to just grab a cab.

It wasn’t exorbitant and saved me time so I was glad I’d done it when the driver dropped me at the bottom of the road my hostel was on.

I climbed up the steps to Little Big House, the most adorable hostel I’ve ever stayed in. It was perched up in this quiet little neighborhood on a hill overlooking the city. When I went inside it got even better. One of the women running it greeted me. She made me a coffee on the house (iced after my long climb) and then walked me through all there was to see in the city before taking me up to my room. 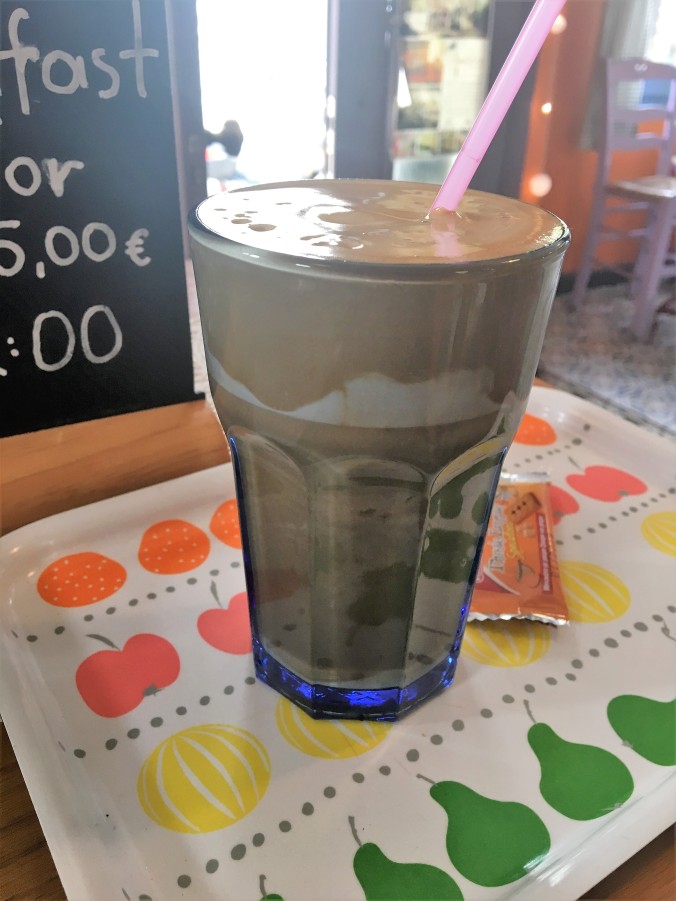 I sunscreened and changed into a skirt to be a little cooler. In Greece most women don’t wear shorts, but you see plenty of tourists doing it anyways. But for my first few days there I did try to be authentic and dress more modestly. Makes it easier if you want to go into any churches too.

Ready for the sun and heat I set out to walk further up the hill to the Trigonian Tower, a part of ramparts surrounding the city. I admired the views and walked over to a church that was supposedly founded by the Apostle Paul. It wasn’t open, but I enjoyed walking around the outside. 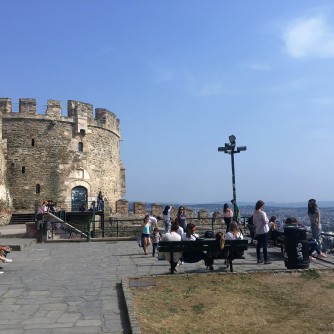 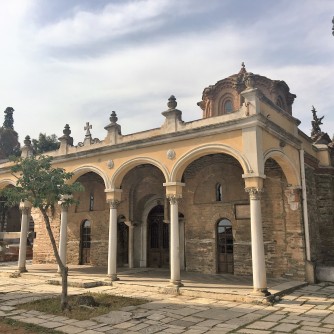 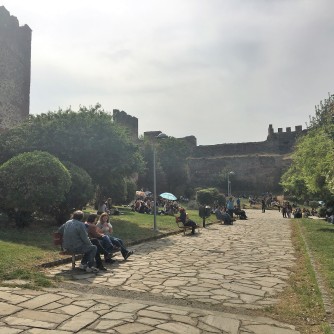 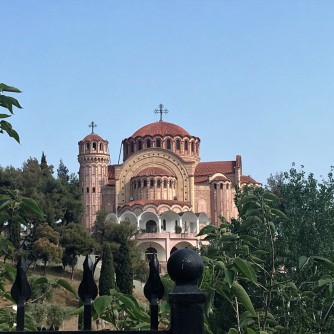 Since it was a holiday, most things were closed, but the fun thing was there were a lot of people out and about. There was music and just a variety of things going on in the city. I enjoyed seeing some of that along the walls and down at Pasha’s Gardens, which weren’t all that pretty but did have nice atmosphere with lots of people gathering. I snapped some photos and walked down the hill towards the city center.

There was a free tour leaving from the rotunda, so I opted to join that. There were only a few other people there, and I soon discovered why. It’s probably the worst free tour I’ve ever had. Not really all that interesting, kind of mundane all in all. I knew it was bad when most people just skipped out at the end instead of leaving a tip. 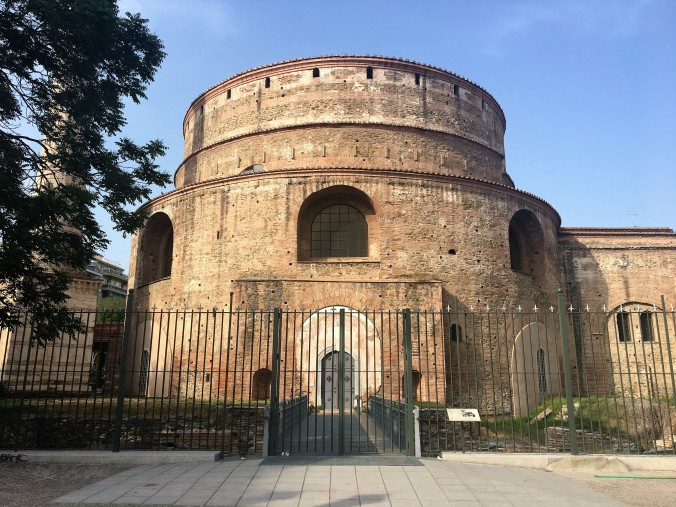 Still it did show me some of the major parts of the city that weren’t open at the time anyways. So that was good.

Afterwards I headed back up the hill to a place where I remembered my hostel had said was good food. On top of having really good cuisine, they also had a lovely view of the city. As the sun was going down I was able to watch and then see the lights go on for the city walls.

A cat came to join me for dinner, they are all over Greece, so I soon became used to them, but I thought it was amusing at the time.

I had stuffed grape leaves for an appetizer, and then a plate of meatballs and potatoes with a yogurt sauce. And they even brought me a small dessert free of charge at the end (apparently this is common in a lot of restaurants… or at least the ones I visited). All in all I was quite pleased.

I headed back to my hostel to relax for the rest of the evening. Had some good conversations with two of my roommates from Germany and Belgium. It’s always awesome to meet fellow travelers from all over the place.

Loving this snow!!! ❄️☃️🌨 #nature #snow #winter #idahome
Treat yourself (in moderation)! Made a mini cheesecake in my instantpot today! Good to have a little treat to finish off the winter holidays. #food #delicious #instantpot
Some of us enjoy holiday lights even after New Year’s. Glad it stopped raining for a bit! #christmaslights #holidays #idahome
What a year! I managed to get out of the country in March before things shut down and traveled to Croatia, Slovenia, and Hungary. My job position of 3 years was eliminated after budget constraints after the pandemic, but I ended up finding work as an elementary school librarian which has been a fantastic fit. All of my colleagues have been so welcoming, and even with this weird year I have enjoyed getting books into kids hands and making the beautiful space my own. As well as a new job, my landlord opted to sell the property I had been living in forcing me to find a new apartment. However, the place I found in place is great and gives me great access to the greenbelt for fun walks, much needed in the quarantine. I started yoga and learning Spanish. I finished National Novel Writing Month for the fourth year in a row and read a hundred books. I definitely won’t miss 2020 but I am grateful for all the changes it brought to my life, most of which have proved to be for the better. Happy New Year everyone! #bye2020 #newyears
Recently the Anne Frank Memorial was vandalized. Today I went by it on my walk and was moved to tears to see the aftermath. It was Anne Frank who once said “In spite of everything I still believe that people are really good at heart.” It’s good to see some evidence of that at least. Thank you Boise for showing that people still care.
Beautiful afternoon walk #nature #Idahome #fall