So day two of my incredible journey. Well two and three. Might as well just blog about my whole time in Hamburg in one go.

The train ride to Hamburg was much less eventful than the one to Cologne. Just was stuck next to a German boy with bad breath who kept coughing into his hands (why can’t European people use their arms like Americans do?). Oh and I also was squeezed onto the train with a crowd of people all trying to go to some convention in Dusseldorf. So I had to squeeze off because I was too uncomfortable to last for four hours and go hop on another car. It was much less crowded there. Sometimes people just move like sheep and all crowd in a space without paying attention.

Anyhow, once to Hamburg I headed straight to my hostel. Well, after a little bit of confusion over how the metro system works. No need to validate your ticket, which was very strange, and at first it can be hard to tell which line goes which directions, but at the station there is always something that shows the stops following. Once I figured that out it was much easier.

I decided to stay in Jugendherberge Hamburg Auf dem Stintfang. It’s a part of Hostel International, which I’ve enjoyed before, so I figured it should be good. What I wasn’t anticipating was a breathtaking view, pleasant facilities, and a delicious and filling breakfast all very close to the action and just a short walk to a metro stop! I think the only letdown was realizing there wasn’t any wifi. I usually don’t even bother to check because most places have it now a days, but if you need wifi…you’re in trouble in this hostel. Otherwise it is great. I enjoyed dinner there my second day. Very big filling and pretty tasty meal for only eight euros. 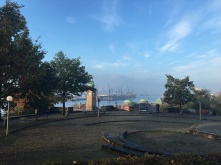 Regardless I checked in, used a small bit of time to recharge, before heading off to explore. I thought I’d go see the Miniature Wunderland, which is supposed to be an incredible collection of model trains and other mini figures etc. Anyhow, I took my time heading over to that, snapping pictures and enjoying the sights of the harbor. From what I saw of Hamburg, some of the best of it is just wandering and seeing the beautiful architecture, waterfront, and various sights.

I arrived at Miniature Wunderland, but unfortunately they told me it would be an hour wait to get in, because it’s a super popular attraction. Had I known, I would have booked tickets online, but it was too late by that time. I just said no thanks and walked out. I wasn’t going to spend an hour of my forty-eight (less actually) waiting in a room. No way. 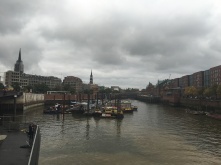 So I set off to go see the Planten un Blomen. It’s a gigantic park in the middle of Hamburg with all kinds of flora. I took far too many pictures there, so I’ll try to only post a few…but it will be difficult. It was absolutely beautiful, and I’m sure it’s even better in spring and summer with the fountains going too!

After that it was getting dark and starting to rain, so I figured I’d head back towards my hostel where I had been recommended a restaurant for dinner.

My hostel had recommended Block Brau for good German food. It was also incredibly close, which was very convenient. I walked over from the metro. No English menu posted. My hostel had to know what they were doing though right? But I noticed unlike a lot of German restaurants that there was a person at a sort of front desk area, making it easy for me to at least ask if they had an English menu. So I went in and asked and said I wanted to eat there by myself.

Now the day before I’d sat at a table awkwardly by myself and had my dinner. I mean, I get a little anxious sometimes about what people think, so it can be uncomfortable eating alone. But I’ve started trying to not care because I’m a young single woman who still wants to enjoy life. And sometimes that just means enjoying a good meal by yourself.

Well…unfortunately in this case it didn’t. It meant they looked around the restaurant and saw nowhere to seat me, just as two German ladies walked up and asked for a table. So they asked them if I could join. I don’t speak German, but I could understand that much. And I stood there feeling pathetic and embarrassed while they talked and then they both smiled at me and motioned me after them.

I embarrassingly admitted I didn’t speak their language and they said they spoke a little English. I apologized and awkwardly sat down at the same table with them. They kindly offered me a seat where I could look out the window and see the river. I thanked them more than once and focused on looking at the English menu. I’m only a little embarrassed to say I ordered a hamburger. Honestly…it was too funny not to. And the restaurant listed it as a specialty. Had a beer too, even though I’m one of those people who doesn’t care much for beer. When in Germany…

Anyhow, I thanked the ladies again when I left, and then went back to my hostel to relax a little for the night, but not before taking a few night harbor pictures.

The next day I started by enjoying the lovely breakfast my hostel provided. There was meat, cheese, bread, fruit, yogurt, cereal, juice, and coffee all included in the price! So I definitely pigged out. My philosophy on food purchases while traveling is usually to make the most of included breakfast, buy a grocery store lunch, and eat out for dinner. Or sometimes I swap the first two. This trip I’ve been doing a lot of crackers and apples for lunch because I’ve hit awkward times for meals due to train rides. Saving money, but definitely ending up a little hungry at the end. So included breakfast can make a huge difference.

After breakfast I took the metro to the Rathaus, city hall where I was supposed to meet up with my walking tour. When I went to Berlin two years ago a girl in my hostel recommended Sandeman’s walking tour and I did it and LOVED it. Put Berlin on the map as one of my favorite cities for a long while. So I definitely wanted to check out the Hamburg Sandeman New Europe tour. 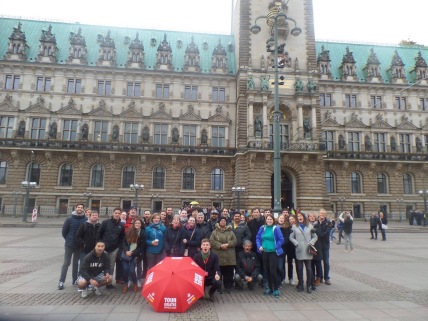 Definitely a good decision. Our guide was funny and insightful. He led us through the city helping to point out things I’d never have noticed just walking on my own. And relying only on tips, he clearly did his best to make it interesting and to be helpful. So at the end I was able to pay what I wanted to pay for his services. Makes it work very well!

We walked all over, but here are a few pictures of the different things we saw. If I was more into the party scene I would have been interested to see the evening tour covering the Rieperbahn which is a sort of party district…apparently quite famous.

After the three hour tour I headed to the hostel for a break, I was getting chilly and tired. So I recharged and then headed off in search of the International Maritime Museum.

Oh my goodness. I cannot begin to describe what an amazing museum it was. Ten floors of ship models and information on sailing and historical artifacts etc. I told my mother that only the main signs are in English, not each individual artifact, and I spent almost two hours there without being able to read everything. It’s an incredibly in depth museum, well worth the money and time in my opinion. Very nicely laid out and with great visuals. It looked like a great place for kids too. 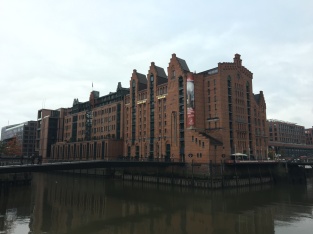 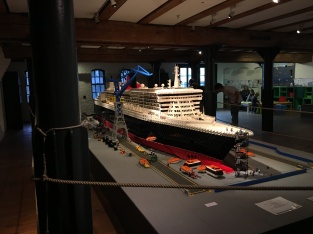 I spent most of my day there and then headed back to the hostel for a dinner there. Figured I’d save money, be filled up, and not have to worry about getting put at a table with German people. Besides, who could resist the view! And the pumpkin soup they had turned out to be one of the most delicious things I’ve had so far on the trip!

Walked around a little at night to enjoy the lights. As I’m not a party person and alone to boot, I didn’t go check out any of the scene here in Hamburg, but it was quite active even early on a Saturday night, so if you’re looking for that kind of thing Hamburg is certainly the place to be!

Off to bed in my hostel. Hoping for a good day tomorrow as I head to Dresden!

One thought on “Hello Hamburg!”