If fear involves shaking and gasping for breath and coming close to tears, then you have yourself a nice picture of fear whenever I end up in a situation that takes me off the ground.

I suppose that’s what makes my parent’s decision to take me ziplining so amusing.

Now people reading this might be thinking…hold on you went ziplining in the U.S. last September. Isn’t this blog supposed to be about your current life in Europe?

See Europe is such a similar scenario to ziplining for me. Both start my adrenaline going. As I stepped onto the plane I found myself shaking, getting teary, struggling to take a proper breath. Not because of fear of heights, but because of my fear of the unknown. 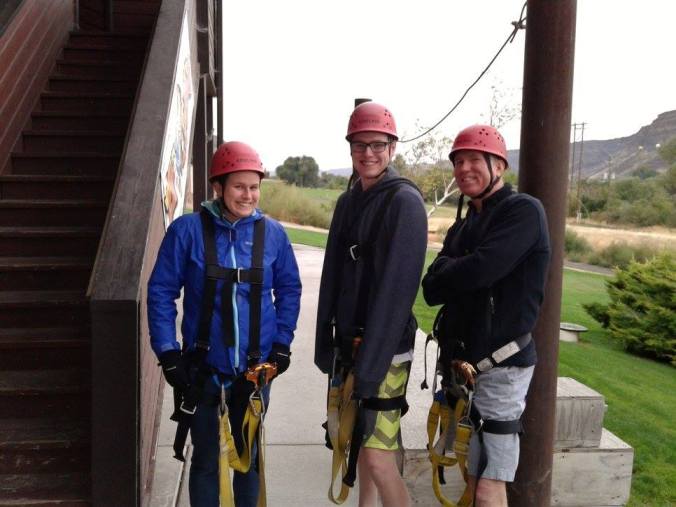 After ziplining, I pretty much know how this year abroad will pan out. I know the start of my journey was getting up on the platform. Like with ziplining, I was reassured by plenty of people that there would be safety and security,  tested by thousands of users before me. But as I walked through the customs line into France, that didn’t keep me from feeling a rush of anxiety over the realization that my feet had left solid ground. I was soaring freestyle, and at this point my trajectory was inevitable, and there was no getting out of my harness. I’ll be on this line until May. Seven months of dangling off the ground.

I am aware that by May I’ll likely be so happy I did this. For all I know I’ll want to do this another year in fact! I will be so proud of myself and so much better off in the long run. However, that doesn’t mean it’s not hard right now.

I just wanted to post this to let people know that I get scared the same as anyone. In two days I’m leaving to go tour six countries by myself. I’ve had a lot of people telling me how brave that is. Several teachers yesterday commented that I was “comme une grande”…in other words…like an adult (which I will point out I actually am). The point is, as much as people keep telling me I’m brave, that doesn’t mean I don’t feel afraid.

The point is I’m taking a leap of faith in spite of my fear. I’m trusting in systems beyond my control, even if I’ve researched safe areas of cities, booked highly reviewed hostels, and planned a very detailed route around Europe. However, I’m almost certain that when I touch back in France in two weeks, I will be so happy I did this, even if it was scary at the time. But for now, I’m simply taking a leap of faith and keeping that quote at the top in mind. Fear is an emotion. Bravery is an action. So let me act now and hope that the fear will disappear eventually.

I hope that others can take these words to heart. Even after years of traveling, it can still be scary. You cannot allow these feelings to keep your in place, however. At some point, you just have to leap and figure you’ll touch back down eventually.

Future posts to come on my great two week adventure. For now, just know that being brave doesn’t mean not being afraid. It just means you go ahead and act in spite of the fear.

2 thoughts on “Just a Little Bit of Courage”