By the time I’d reached Munich I’d begun to thoroughly regret my decisions on traveling for so long to so many places. I’d caught a cold from someone along the way and was tired and achy and just feeling awful. I missed being able to understand the language around me and longed to be back in my own bed.

Can I be done now?

However, though it was tempting to give up, I had to keep going. And I was determined to see some of Munich even if it exhausted me.

I arrived in the afternoon and checked into my hostel. I stayed at Wombats, which is now one of my favorite hostels ever. I would highly recommend you check them out. They also have branches in London, Budapest, and Vienna. They were extremely friendly and provided a clean and comfortable hostel right near public transportation for a very budget price. Plus a really delicious breakfast buffet for a bit extra and some good areas to socialize with other travelers. 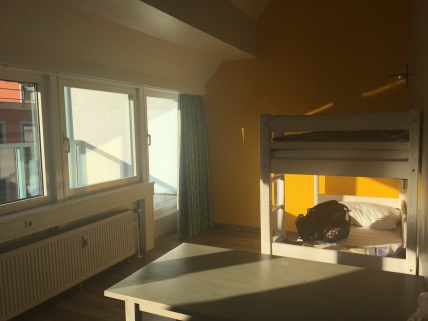 In spite of my tiredness, I decided to actually try to get out and see some of the city. I’d visited Munich before during my last two-week Eurail adventure, but I hadn’t seen much as it had just been a day destination rather than somewhere I spent the night. So to finally be back, I was determined to actually see a few things further afield rather than what was located right around the train station.

My first place I set out for was the English gardens. I’d had people recommend it to me, and it was indeed lovely to see. My favorite part was the surfers in one of the canals. Very fun to watch!

After walking for a bit I headed off towards the city center and walked there a bit too. There was very little I was dying to check out in terms of sites. Munich is fun more for walking around than for any one major tourist attraction. Although, if I’d been there longer, I know I would have found some other good things to do. I actually really wanted to go to one of the concentration camps nearby, but by the time I would have arrived it would have been too late to really see much. And running on as little energy as I was, it was probably for the best that I didn’t emotionally exhaust myself on top of everything else.

After a short venture around the main areas downtown, it began to get dark so I started considering food. I headed to a restaurant the hostel had recommended (they gave a handy list), but unfortunately it was quite crowded. Feeling as gross and tired as I did, I opted to head back to my hostel and either relax for a bit before venturing back out, or see if there was food at the bar.

Sure enough the bar served pizza! So yay for having some good food without too much effort. Plus Wombats provides you with a free welcome drink too, so free alcohol too. So that was my evening.

Anyhow, sad to say it was time for bed for me after that. Sorry for any expecting a long post on how awesome this city is. Unfortunately I cannot give a true testament to Munich. I’d say from the little I’ve seen it’s a very aesthetically pleasing city and certainly one to hit up if you’re going around Germany. Do your research maybe and see what else there is to check out. I wish I could help more! However, that’s just traveling sometimes. You’ve just got to keep on going.