“Everything is improved by the judicious application of primates.”
― Chris Roberson

The next day our family headed on our way further south. We made a stop along the ocean to walk along the beach and enjoy the lovely sunshine. However, our real destination for the day was Gibraltar.

I really didn’t know much about the place overall. My mother kept talking about it though, and the apes especially. And that definitely caught my attention.

“We might see…like actual wild monkeys?” I’d asked my father.

“More than likely,” he said. “They’re usually pretty easy to spot. Like to hang out around areas with lots of tourists in hopes of food and such. They’re pretty used to people from what I’ve heard.”

Well that sounded pretty exciting. My family has a favorite story of when my grandmother and grandfather lived in the Philippines. Apparently my grandfather came running in yelling one day that he’d caught a monkey. He led my startled grandmother outside to a trashbin where he opened the lid and out came a startled “meow”. Or at least that’s sort of how my grandmother tells it.

So I had fun joking with my brother about fulfilling the family legacy of catching a monkey (jokingly of course, I’d never harm a living thing). And it was all good fun.

We arrived at the border of Gibraltar. The family decided to leave our car in Spain and walk over instead. My father had read this was simpler, so we opted to try that.

We then headed through customs, and walked into another country. Our walk took us across a tarmac, which still seems strange thinking back. And with that we were in Gibraltar.

Our walk took us up to the trolleys where we would be able to catch a ride to the top of the hill. Even though it was the off season, the line was very long. It looks like they only have two trolleys working at a time, each with a limited number of people on board. So for any heading to Gibraltar, just know you might have to wait a while to catch one to the top. Maybe they find a way to speed up the process at other times of the year, but not during December. Also, it’s not cheap, so definitely investigate other options if you can.

At the very least, the views were beautiful. And we enjoyed our slow ascent up to the top of the rock.

We’d thought to bring a picnic with us. It seemed logical, as it was an open outdoor area, so we could probably eat and admire the views while we did so. So with a baguette sticking out of our bag, we headed off. 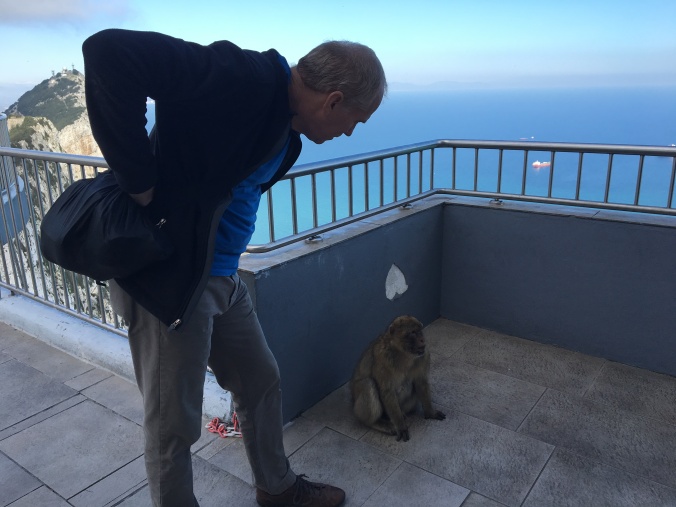 My dad pulled the bag away from them, using his height to keep it out of reach, but it was already too late, and the other passengers had clearly gotten the impression that the monkeys would attack you. They took off fleeing. I think some people were probably scarred for life, and I’d like to sincerely apologize to them. So if you were in Gibraltar in December of 2016 and are now reading a blog that sounds vaguely familiar… I am so so so sorry.

For the rest of you, I can say that I felt something on my leg next. And I looked down and sure enough there was a little monkey grabbing at my pant leg, staring up into my face with a “please give me food expression”. So yes, I have now officially been grabbed by a monkey. Of all the things to be grabbed by, not all that bad I suppose. But I was sort of scared he would climb up me, and we still needed to get our food to a safe place, because more and more monkeys were coming.

We took off up the steps and towards the inside part of a restaurant. Surely, we’d be safe there! There was a sign on the door saying we weren’t allowed to bring outside food in, but looking around it appeared we’d escaped. There were no monkeys in sight in the narrow hallway leading to the restaurant. But it didn’t keep us from feeling like we might be attacked at any moment.

My dad put the baguette that had been sticking out of the bag out of sight. It was already slightly damaged anyways, so it didn’t hurt to break it further and stick it down. My mother put her backpack under her coat hoping to fool the monkeys, and with those measures in place, we set back out. 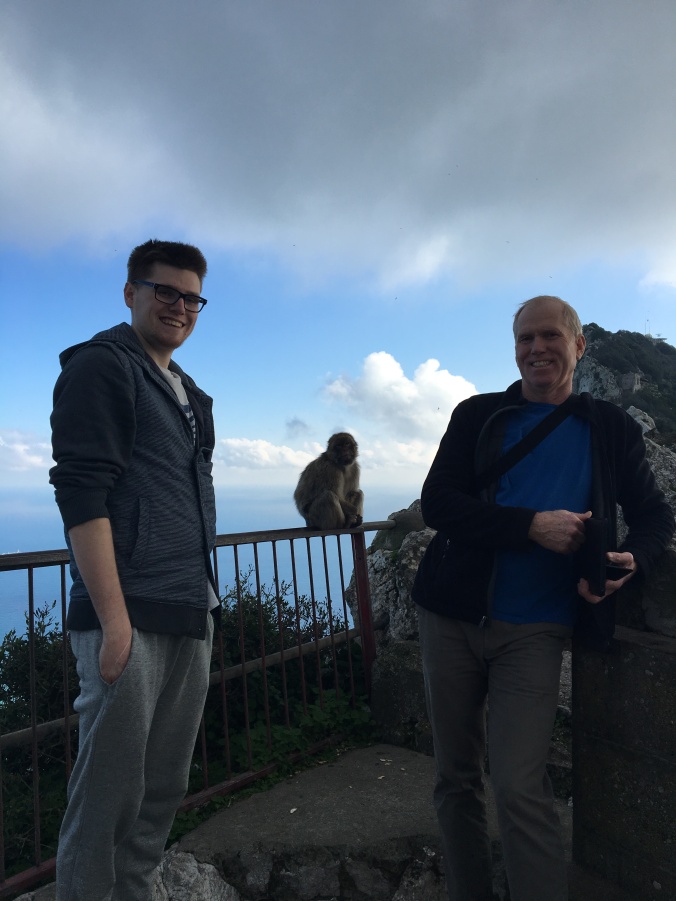 The monkeys were still lingering. One even wandered inside the restaurant while we watched. I just imagine the poor staff having to deal with that.

We had to guard our belongings closely, but they had begun dispersing in hopes of getting their next meal from the next trolley coming up. We watched as they lay in wait. One snuck up from behind and nearly snatched our picnic, but my dad had a good hold on the bag. I think more people were traumatized again. Sorry fellow tourists.

The lesson is, don’t bring food with you. At all. It’s a bad idea. Hold onto your belongings. And just be warned these little guys are fast and sneaky.

After feeling safer we began to take in the beautiful views. We snapped some pictures, and then headed down along the rock, watching all of the monkeys as we did. There were even babies playing in the trees! They were so cute and small and they kept fighting with each other. 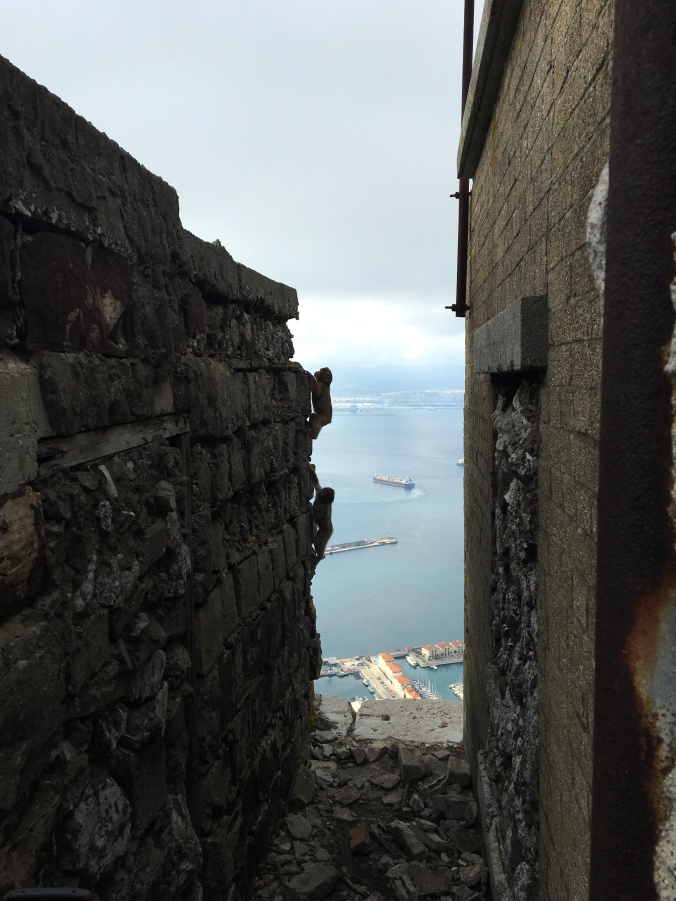 They were truly fascinating creatures. We watched as some of them hopped onto passing cabs and then rode for a bit before hopping off again. They were a wonder to watch, unafraid of humans so close enough to get a good look at.

We walked further down the hill and finally found an area with very few monkeys. I stood watch as the family started pulling out food. We had a very quick picnic, always looking all around us, worrying that at any moment monkeys might appear and steal our food. 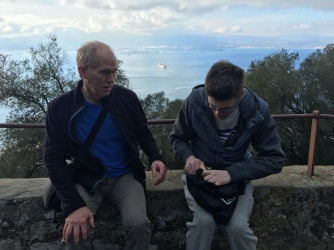 After our very speedy picnic we headed on down the rock, admiring the beautiful views. We walked back through the town and over the tarmac again and through customs once more. We found our car and headed off towards our hotel.

We stopped in Tarifa for the night. We stayed in La Missiona, a nice hotel in the middle of town. Since we’d arrived in the evening after our full day in Gibraltar, we decided to get food first. We went ahead and just ate at the restaurant attached to the hotel, which actually had surprisingly delicious food. My mom and I had fish and chips and my dad and brother were more adventurous with some fun tuna dishes.

After dinner we took a walk and grabbed some pastries from a local shop. The town had been having an even with fake snow for children to play in. The fake snow turned out to be foam (like soapy foam), but we walked over to where the event was going on to see what it had looked like. Mostly we just worked off our dinner and enjoyed the town by night.

Then it was back to the hotel for a good night’s sleep. After all, the next day we were going to leave the continent. Morocco was waiting.

3 thoughts on “Beware of the Monkeys: Gibraltar”